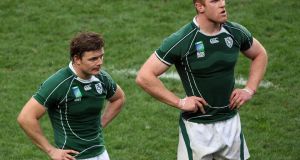 Ireland’s rugby authorities were so worried about media leaks after a disastrous World Cup campaign that they employed a former British military intelligence officer to search for bugs they thought were planted inside their Dublin headquarters, it has been claimed.

A new book by Seán Hartnett, the pseudonym of a former army spy, claims to reveal the extent of the fear within the Irish Rugby Football Union over the Irish media’s ability to report on dressing-room rows and plans to replace managers in the 2000s. The IRFU said in response that Hartnett’s claims were “fictionalised”.

Hartnett said he got embroiled in Irish rugby’s internal squabbles after Ireland’s failure to advance into the final stages of the 2007 World Cup in France, a campaign that ended with an unexpected 15-30 loss to Argentina in Paris in the last group game.

In the book, Client Confidential, Hartnett says the IRFU asked him to warn members of its board that he would use specialist tracking devices to discover if any of them were covertly recording meetings with their mobile phones.

At the time he was employed by the IRFU, the author had just moved from a secret counter-terrorism army unit in Northern Ireland into a private industrial espionage business in the Republic.

Hartnett also claims he was asked to brief the newly appointed Irish head coach Declan Kidney. “Officially, the briefing was to inform them of dangers involving information security. Unofficially, it was to tell him that not all his enemies were outside the walls of the IRFU HQ.”

Hartnett, born in County Cork, says he was brought in to investigate leaks after the contents of a post-mortem meeting about the 2007 World Cup, which took place in 2008 at the Shelbourne Hotel in Dublin, were reported “almost word for word” by the Irish media. He concluded the leak at the Shelbourne Hotel was probably the result of recordings on a mobile phone.

Hartnett says Phillip Browne, the chief executive of the IRFU, was so concerned the meeting had been bugged he eventually called upon Hartnett to search for listening devices as well as deploying other devices to search for possible covert mobile phone recordings in their headquarters.

Hartnett says he then tested security by easily breaking into their HQ in Dublin’s Ballsbridge district through taking an employee’s electronic pass card and then returning to the building via its underground car park. The former counter-terrorist operative says from there he was able to walk straight into the IRFU’s CEO’s office and rifle through Browne’s files.

“From there I moved to a room next door where player information, including salaries, was openly on display. I now knew how much Paul O’Connell [the former Ireland captain] was earning. As I walked around the building that morning, picking up information as I went, not one single person asked who I was or what I was doing.”

After issuing his security report, Hartnett says he addressed IRFU board members, telling them that the next press leak would be fully investigated. “Before this meeting began, I carried out a full sweep of this room … If anyone so much as turns on a mobile phone, I’ll know about it.”

He claims the looks he got from Irish rugby bosses were “less than pleasant; in fact, they were downright hostile”.

An IRFU spokesman said Hartnett had “fictionalised” their dealings with a reputable and credible risk assessment company. The IRFU employed a company RMI to “conduct a wide ranging risk assessment of the then newly occupied IRFU headquarter’s building, IT systems, hotel accommodation, meeting facilities being used by the Irish team and IRFU”.