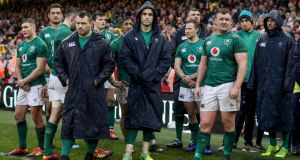 Stuart Lancaster says the pickle in which the Irish rugby team now finds itself may be traced back to the Red Rose rout of Ireland in Dublin. Photograph: Dan Sheridan/Inpho

Blame England. Former English coach Stuart Lancaster might have caught the mood of the weekend better than many of his Leinster players. The pickle in which the Irish rugby team now finds itself, he says, may be traced back to the Red Rose rout of Ireland in Dublin in Ireland’s opening match of the Six Nations Championship.

Lancaster, who was involved with the England team for four Six Nations competitions and the 2015 Rugby World Cup, believes the first defeat in the first match at home knocks a team further back than just the loss of the points.

In an Irish squad looking for answers, the simplest and right solution is sometimes the most obvious one.

“I think in the Six Nations, momentum is such a big thing and if you lose your first game at home, it tends to have a knock-on effect throughout the course of the tournament,” said Lancaster.

“If you lose one game, you are under pressure. I know that from experience. I had four Six Nations and lost once in each. The magnifying glass really comes on individuals, the team performances and the coaches.

“It wasn’t that long ago that Wales lost two games in 2018 and they lost three games in 2017 and came fifth. So it happens.”

Lancaster added that rather than shed tears looking into the trough of the last seven weeks, Ireland needs to ensure the three-month run-in to Japan is perfectly timed with the team needing to peak for their first match against Scotland.

“Is it Scotland first? So without looking too far ahead, you have to peak for your first game.”

The 49-year-old added his voice to many others who do not see a link between how a team performs in March and how it might perform in September. In a sense Ireland has proved that to be the case, at least in reverse. The All Black-beating Irish team of last November was a different animal to the team that arrived in Aviva Stadium three months later to face England. The capacity for teams to change is significant.

When Lancaster prepared England for the RWC they hosted in 2015, the team had a good run-in. But their momentum changed and after an opening win against Fiji, the home side lost 25-28 to Wales in their second match, and crashed 13-33 to Australia for an early exit.

“If I go back to 2015, we had a good finish to the Six Nations: 55-35 against France. We had some good warm-up games. We beat France, we beat Ireland in a warm-up game. We beat Fiji with a four-try bonus and then in one game things changed.

“I don’t think it is related from Six Nations as to who is going to win the World Cup. But they will certainly want to take the lessons learned and build well during that June, July, August period because you have to hit the ground running in September.”

Lancaster was adamant that he had no concerns for the returning Leinster players. He saw a fix as straight forward, adding few players had “hit the heights” they achieved back in November.

“I wouldn’t be concerned long term, by any stretch of the imagination,” he said. “The point I made about momentum had a bit of a knock-on effect through the whole of the squad.

“Back into Leinster mode”

“But what I have to do now is get them back into Leinster mode and get Johnny (Sexton) playing well for Leinster because he is such a key player for us. I’m confident he can do that and we can do that.”

Injury wise, Flanker Dan Leavy has returned to full training along with Joe Tomane and scrumhalves Luke McGrath and Nick McCarthy, while Robbie Henshaw is not available for Leinster selection this week.

Henshaw (dead leg) is running out of time to be fit for Leinster’s Heineken Cup quarterfinal against Ulster on Saturday week.

“Very frustrating for Robbie, I feel sorry for him,” said Lancaster. Lock Devin Toner (ankle) is another frontline player struggling, while Josh van der Flier will see a specialist this week about his groin injury.

Leavy is hoping to see game time for the first time this year against Edinburgh with McGrath also “pretty likely” to take part. Leinster are unlikely to line out the majority of the returning Irish players until next week.