Our rugby correspondent also hands out the gongs for player, coach, team and try of the tournament 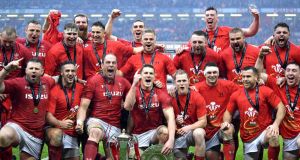 This was so much more fun a year ago today. Then there was a case for picking all 15 Irish players, before settling on nine. Others even worked in more than that but, twelve months on, there’s only two. Oh well.

Reading through the team from a year ago only serves to highlight the loss of form experienced by many of Ireland’s key players. Sure, Jacob Stockdale was never going to replicate his astonishing haul of seven tries, although to the end he remained a potent attacking winger capable of creating something out of very little and did score in two games. He also made more line breaks (23) and more metres (395) than any other player in the tournament.

But with the memory of last Saturday’s thorough beating still fresh, save for Keith Earls, Cian Healy and James Ryan again, it’s hard to make a case for many of last season’s outstanding performers, Tadhg Furlong, Conor Murray, Johnny Sexton and CJ Stander, who missed two games, while Dan Leavy didn’t feature at all.

His technique under the high ball, whether receiving or chasing, could be used in a coaching DVD, particularly against England when he was outstanding. He bought an extra three seconds when tackled out wide by placing the ball before engaging three English defenders. Cory Hill went in for a try on the far wing two phases later.

Erred in defence early on against England, as he admitted with typical honesty, but thereafter he was solid in all he did. He looked electric throughout and scored in each of Ireland’s three successive wins, including one against Italy when moving into midfield.

Henry Slade had more moments going forward, but Davies was such an unwaveringly strong and consistent player, whom Wales missed last season, and was back to his best. Never outflanked, he’s an absolutely key figure in their outstanding defence, took his try well against Scotland and provided Wales with a big left-footed kicking option.

Another of the rocks in the Welsh defence. He was one of the few straight-up carriers who came onto the ball from depth and with pace, and so consistently generated momentum over the gainline – which was key to Wales’ two tries against Scotland. Then scored the key try against Ireland, before hauling down Jacob Stockdale.

Pushed very close by Josh Adams in a strong category, but he has improved his ability in the air beyond recognition and revelled in England’s kicking game, notably with that first half hat-trick against France. And he was the tournament’s leading try scorer with six, after four last season.

True, Owen Farrell was possibly more consistent but was part of England’s collapse against Wales and Scotland. Yes, there were flaws and mistakes with Russell. There always is with the Scottish puppeteer. But he was the tournament’s most entertaining player and had the most try-scoring assists with four, all of them devilish in their creation. A wicked kicking game and king of the intercept.

A close call between Ben Youngs, who was the most consistent and Tito Tebaldi, who returned to inspire the Azzurri to their best two displays against Ireland and France. But after coming on in the French horror show at Twickenham and then starting three games the 22-year-old Dupont, a lethal runner, figured prominently for clean breaks (eight), defenders beaten (17), offloads (seven) and even turnovers won (seven).

Mako Vunipola was well on course before his tournament was cruelly interrupted, and Cian Healy had a fine tournament until last Saturday, carrying more effectively than Evans. But that game, when he fell on the wrong side of a pedantic Angus Gardner and conceded four penalties, swayed this toward Evans, strong in the set-piece and mobile around the park.

Ken Owens, son of Gatland, had an implacably strong tournament and after some lineout wobbles, his darts were on the money against Ireland. But England’s lineout was more efficient and George was the more dynamic player over the course of the tournament.

Yes, he became a little too wound up amid the Cardiff cauldron when hauled off after conceding two penalties, and his on-field verbals and screaming are over the top, but he showed his incredible mobility and pace for a prop.

Partly culpable for last Saturday’s lineout flaws, Ryan just shades the consistent George Kruis. He had similar tackle and lineout stats over four games as Kruis over five, but was more effective in his carries – 63 for 74 metres to Kruis’s 21 for 36. In his four games, Ryan’s 34 gainline successes were also over double his nearest secondrow rival, Federico Ruzza, who had 15.

A colossal presence for Wales, who again set the tone from the anthems through to the celebrations last Saturday, making five of their 19 dominant tackles. At 33, and in his 133rd Test, he’s rarely played better. Rested for the Italy game, he led for every minute of the other four, making 71 tackles.

As so many Welsh players do, the Cardiff Blues flanker became Superman in a red jersey. He was on a defensive mission against all the primary opposition ball carriers, making 25 tackles last Saturday and 83 in the tournament. Carried hard too. Wales didn’t even miss Sam Warburton!

His yellow card against Ireland was a rare blemish. Coming into the tournament with only five caps, Curry added huge energy and real balance to the English backrow, making the most tackles (86) of any player in the tournament and also made his presence felt at the breakdown by winning five turnovers. And he is still only 20.

Granted, there was a costly turnover when Russell ripped the ball from him, but England’s fit-again human wrecking ball gave them much of the foundations for their attacking game with his leg-pumping carrying. The Championship’s leading carrier with 71, no forward made more metres, 231. England are a different team with him.

No man epitomized Wales’ mix of defiance and composure in the heat of battle more than their phenomenal skipper and beating heart.

Try of the tournament

There were some momentous ones, like Cory Hill’s match-turning line and try after 34 phases against England. Some defining ones, such as Josh Adams from Dan Biggar’s cross-kick. Some precision strikes plays, not least by Ireland, such as Stockdale’s against Scotland and Sexton’s against France, or some wickedly Finn Russell-conceived ones, such as Darcy Graham’s from the outhalf’s finger tip pass inside to Byron McGuigan. But in the context of the game, Sam Johnson’s line and finish to put Scotland 38-31 ahead off Russell’s beautifully delayed pass briefly completed what should have been the mother of all comeback wins.

Match of the Tournament - England 38 Scotland 38

The best was kept until last with Scotland’s fearless and thrilling recovery from 31-0 down to score six tries and 38 unanswered points playing as Russell said, Scottish rugby. The old Championship had never seen anything quite like it.

Once again he demonstrated his uncanny ability to have a team – and even a country – perfectly primed mentally and tactically, and ready to embrace, the big occasion last Saturday. He has almost performed a miracle with Welsh rugby. He will ride off into the sunset with a third Grand Slam from his 10 Championship campaigns. It was their 36th win, to go with one draw and 13 defeats from his 50 games.

Andy Farrell set to name first Ireland team; FAI staff upbeat after first meeting with Quinn and Owens 07:27
‘It doesn’t bother me’ – Thomas Barr on the what ifs of Rio 07:00
Hopes of a home winner alive as Barty reaches last four 06:45
Waterford’s Bennett aware of past but looking to a better future 06:30
Owen Doyle: Breakdown of law and order in rugby must stop 06:30
Here is your handy guide to sport on television this week