Ireland bounce back against Wales but true test awaits

Ireland head coach Andy Farrell has hailed his side as "dominant" in their 32-9 win over Wales in the opening round of the Autumn Nations Cup. Video: VOTN 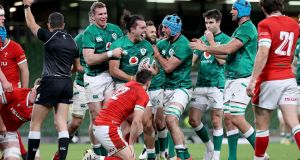 As a belatedly arranged schedule filler, Friday night’s Six Nations/Autumn Nations Cup opener at an empty Aviva Stadium worked far more to Ireland’s advantage than it did for Wales.

Andy Farrell could reflect on a job well done, despite losing Jacob Stockdale, due to a calf strain, and Iain Henderson’s ‘medical issue’, before kick-off and then Johnny Sexton, due to a leg strain, by the half-hour mark and Billy Burns, for an HIA from which he did not return, 15 minutes from time.

Farrell and the Irish coaching ticket were given encouraging signs that James Lowe, who finished off the 32-9 victory with a try on debut in the game’s final play, and Jamison Gibson-Park are Test match pedigree, as is Ronan Kelleher, who was making his first Test start.

So too, is Caelan Doris, but we already knew that, while the reshuffles before and during the game demonstrated that the second-row stocks are deeper than expected if this performance was a template for Quinn Roux. Conor Murray even showed he could fill in at outhalf in an emergency.

“Dominant,” was the word Farrell used, and fairly so, when asked to analyse Ireland’s performance. “I thought in the first-half there was some really good dominant stuff. I thought we had a good tempo until half-time and then in the second half we were a little bit disjointed at times.

“Wales did a good job on stealing ball at the breakdown, which just stopped a little bit of our continuity. But overall I thought it was a dominant performance and the scoreline reflected that.”

While this was a positive night for Ireland, the caveat was the standard of the opposition. In truth, as Farrell also admitted, Ireland ought to really have won by more, for they left tries behind them, the main blemish being a tad guilty of white line fever.

But that’s a helluva better place to be than Wales. While they were aggressive, particularly at the breakdown, they looked like damaged goods and hardly fired a shot.

Regarding Stockdale chances of being fit to face England at Twickenham next Saturday, Farrell said “we think he’ll be available next week.” As for Henderson? “Again, speaking to the medics, we expect him to be okay next week.”

Sexton, speaking after the premature end to his 100th test match including a half-dozen with the Lions, revealed: “I just picked up a strain on that penalty. So frustrating.

“I was enjoying it out there but most importantly the team won and we are very pleased to bounce back,” he said in reference to the defeat in Paris. “The lads showed great character all week to turn up. We knew it was going to be difficult.

“They are in a difficult phase, Wales, and to turn up the way we did . . . We could still be a bit more clinical and take a few more opportunities than we did but we did some things much better tonight. We are still building with the new coaches and a lot of new personnel. It takes a while to get used to international rugby but we are getting there slowly but surely.”

However, Ireland do have issues heading to Twickenham next Saturday, not least at outhalf, with Sexton himself not sounding overtly confident about his chances of playing.

“I don’t know. I will look after it well the next few days and hopefully I can get back. It doesn’t seem too serious but we will see what the scan says tomorrow. I’d still be hopeful for next week.

“I thought we were good tonight but we still need to be more clinical. If Wales had scored just after half-time it was a close game because we didn’t make our dominance count in the first-half.

“I felt for Billy going off with the HIA. He seems okay after the game. He was doing really well and then Conor came on and he finally found his natural position, I think. He needs to stay there now, I think,” quipped Sexton.

“I am very happy for the whole squad. When you have been questioned as we have over the last couple of weeks it shows character to bounce back and it shows what type of people we are.

“We are very proud to play for this country and sometimes when you don’t perform as well as you would like it doesn’t come across. But you could see out there how much it meant to us and that is what we are most proud of.”

While pleased with the array of debutants, Farrell understandably also singled out Roux and Chris Farrell.

“These are aspects of where we’re at as a group but we’re a new group that’s trying to get as cohesive as we possibly can be. The most pleasing part was the cohesiveness of the performance.”

Stockdale’s absence last night, even if available in a week’s time, also creates an issue for Farrell and co at fullback against England at Twickenham. With Jordan Larmour and Will Addison injured, the only apparent options are Stockdale, who was in need of a restorative outing last night, or Keenan.

Wales for their part, learned very little from sticking with the established order, other than a sixth successive defeat re-affirms their sudden and sharp decline from the heights of the Warren Gatland era.

There’s that alright, and plenty more besides.