Leinster start slow but ease past Ospreys for 24th win 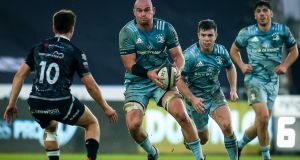 Leinster played in fits and starts but it more than sufficed to rack up a 24th consecutive victory in the Guinness Pro14 and a fifth consecutive four try, bonus point win this season. It was a scrappy affair but once Leo Cullen’s side found some consistency and precision, having conceded an early try, they took a firm grip on the game.

Three tries by the interval and another shortly after half-time guaranteed victory but the visitors won’t be too enamoured with the last 30 minutes. Leinster captain Rhys Ruddock was a deserved man-of-the-match following on from last week’s accolade but there were others who also impressed.

Jimmy O’Brien excelled at fullback, Luke McGrath was busy and effective at scrumhalf but it was up front that visitors won this match. Michael Milne had a superb game in his carrying, James Tracey too, Michael Bent played a crucial role in one of the tries, while Scott Fardy and Ross Molony, winning his 100th cap, applied themselves diligently.

The work of the backrow, Josh Murphy, Scott Penny and Ruddock was central to the victory. Cullen was satisfied with the result if not all aspects of the performance. “We were a little bit sluggish at the start (but) I thought our response was very good. We have a lot of young players who are learning.

“There were some good bits but there are some things that we can get better at. It is another positive step in young players’ development.”

On six minutes Milne was penalised for hinging at a scrum and Ospreys fullback Cai Evans thumped the ball into the corner. Leinster got their maul defence all wrong and conceded a penalty try, which was exacerbated when referee Sam Grove-White brandished a yellow card to flanker Scott Penny.

The visitors gradually found a playing rhythm despite being a player down. Harry Byrne thumped a penalty 40 metres deep inside the Ospreys 22, a brilliant strike and, from a lineout maul, hooker James Tracy burrowed under a couple of tacklers with help from his captain Rhys Ruddock. Byrne added the conversion.

On 25 minutes, from a lineout turnover, Leinster hooker Tracy collected the ball and took off, Rory O’Loughlin surged through a gap when the ball was shifted wide and then O’Brien gave Dave Kearney a scoring pass. Byrne’s conversion was a beauty, although he did miss a relatively straight forward penalty chance soon after.

The visitors increased the lead with a third try, Milne with his umpteenth surge over the gain-line, Kearney made the definitive break off an inside pass and then Byrne’s cut out ball sent Penny, after a one-handed juggle, over in the corner.

Leinster’s replacement frontrow were heavily involved in the bonus point try on 56 minutes, Dan Sheehan took a tap penalty from five metres and Peter Dooley was driven over by his teammates. Byrne added the conversion.

The game lost a little shape as both sides looked to their replacements. The Irish province lost Harry Byrne and Tommy O’Brien to leg injuries and the latter prompted a backline reshuffle with Hugh O’Sullivan coming on at fullback and the excellent O’Brien switching to centre.

Leinster will be a little disappointed that a couple of lineouts went astray in decent attacking positions and that they gave the Ospreys one or two easy outs when pinned back inside their half. The Welsh club eventually made their way into the Leinster 22 with 10 minutes remaining but the visitors were robust in their defence; a spiralling error-rate meant they had to be.

The game finished when Penny forced a turnover penalty, Leinster once again going through another defensive set, having spent most of the last 20 minutes largely stuck inside their 22. Ospreys didn’t really look like scoring, too narrow and pedestrian in possession, but the visitors will be reasonably satisfied nevertheless that they refused to give up points in that period.

France yet to receive approval to travel to Ireland for Six Nations clash 01:00
Johnny Sexton sees Tom Brady’s lengthy NFL career as inspiring 01:00
GAA set to extend ban on intercounty activity until March 22:40
Man United stunned as Oliver Burke wins it for Sheffield United 22:31
Rangers move closer to the title as Celtic get back on track 22:02
Here is your handy guide to sport on television this week