Ireland head coach Andy Farrell has hailed his side as "dominant" in their 32-9 win over Wales in the opening round of the Autumn Nations Cup. Video: VOTN 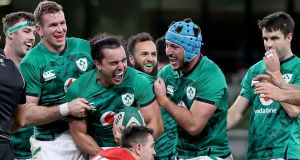 Ireland withstood all manner of disruptions in losing two players before the game and both outhalves during it to launch their Autumn Nations Cup campaign with a well-deserved and, in truth, handsome win.

Better at set-piece and both cleverer and more ambitious in attack, their superiority was everywhere, and all this while giving impressive debuts or full debuts to the lively James Lowe, the equally impressive Jamison Gibson-Park, Rónan Kelleher and Billy Burns.

Ireland had been forced into a double pre-match reshuffle caused by Jacob Stockdale’s sore calf and Iain Henderson’s “medical issue”. Quinn Roux came in, so replacing the one established combination in the Irish line-up, namely secondrow. Stockdale was replaced by Andrew Conway, with Hugo Keenan switching to fullback, while Tadhg Beirne was added to the bench.

As it transpired, Roux had his best game in an Irish shirt. As is his wont, he clearly added serious oomph at scrum time behind Andrew Porter, who had the better of both Welsh looseheads, and even scored the game’s first try with a muscular close-range finish. Caelan Doris, in only his second Test start at his preferred position of ‘8’, was almost predictably outstanding.

So Ireland adapted seamlessly, and even remained in the ascendancy when losing Johnny Sexton, in his 100th Test match, after a high calibre opening half-hour by the Irish captain, as Billy Burns came in for his debut. He departed entering the final quarter, but Conor Murray underlined his innate footballing skills by deputising at outhalf to help steer the ship home, even landing three kicks out of three.

Admittedly, they too had issues recycling their own ruck ball after the break on a night dominated by the whistle of Mathieu Raynal. The penalty count was a faintly ridiculous 18-13 in Ireland’s favour.

Lacking a Doris-like or Chris Farrell-like carrier, Wales did show some ambition in the second-half, but Ireland’s defence had the measure of a prosaic attack. And this was after Wayne Pivac kept faith in an established team.

Ireland set a fluent high tempo from the off, whereas Wales brought aggro and ill-discipline, but not much else. Lowe was heavily involved from the start, making a good hit on Leigh Halfpenny and a good catch in a tetchy start, as Peter O’Mahony and Alun Wyn Jones - both Lions captains in the series three years ago - renewed acquaintances. You could have put money on that one.

By rights, Ireland should have made more inroads in the first quarter rather than exchange three-pointers. But Lowe couldn’t hold onto a skip pass from Sexton after his clean break from Gibson-Park’s neatly worked wraparound when a try was on.

Another lovely strike move, Lowe ghosting onto Gibson-Park’s inside skip pass off a lineout maul before linking with Sexton, led to a close-range penalty, where Ireland opted for a five-metre scrum to the rights of the posts.

It didn’t lay the expected platform, and Gareth Davies trapped Gibson-Park at the base, but Caelan Doris and Sexton secured the recycle and a bout of close-in drives by the forwards ended with Doris making a strong carry before Roux muscled over.

Sexton converted but after Gibson-Park won a turnover penalty from Sexton’s deft grubber, the Irish captain hobbled slightly when turning away from his successful three-pointer. Burns came on and James Ryan assumed the captaincy.

Even after Leigh Halfpenny’s second penalty, Ireland’s ambition and scrum supremacy remained intact, the frontrow pressure winning one against the head, and after Josh Adams denied Andrew Conway a try, Ryan pointed to the posts for Burns to make it 16-6.

When Ryan then opted to go up the line, Conway was again tackled into touch by Adams after Gibson-Park gambled on the blindside. At which point Wayne Pivac replaced the pressurised Carré to secure the last scrum of the half five metres from their line. The 10-point gap was a reprieve for Wales.

The Irish scrum remained on top, but conceded three penalties in quick succession on their own rucks. Leigh Halfpenny was short from halfway before making it a one score game.

Ireland needed a big play and Doris provided it, charging down a Davies’ box kick and brilliantly keeping the ball infield by scooping it between his legs, like a trick tennis shot. Cian Healy was denied a try by Davies and Taulupe Faletau before Wales lifted the ensuing siege when Biggar, unpunished, lay all over Healy close to the line - a poor miss by Raynal.

Compensation came by way of another Burns penalty after a neat snipe by Gibson-Park. Their bench making an impact, Wales injected some width into a sustained attack, but Halfpenny missed an eminently kickable penalty.

Ireland were being stressed now, putting together good back-to-back defensive sets in an exhausting spell past the hour, but after fine takes by Conway and Burns, Lowe’s kick into space earned a reprieve.

Ireland were further disrupted by Burns having to depart, Murray coming on at outhalf and unerringly landed a penalty after good pressure by O’Mahony, Josh van der Flier and Dave Heffernan, as Ireland’s bench came into play.

Murray tagged on another one for offside after a diving Finlay Bealham alertly reclaimed a loose ball to effectively seal the deal.

But Lowe, voracious for work and a try, steamed onto Doris’ pass when picking off the base of the scrum with an outside in line through the tackle of Owen Watkin. That was the cherry on top.