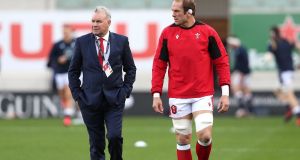 Welsh rugby has been plunged into crisis for multiple reasons. Chief among them is the five successive defeats that hold them hostage to the Warren Gatland era.

The slide from Grand Slam champions and fourth place at Japan 2019 to eighth in the world rankings was only halted by Japan, Argentina and Fiji playing no games, thus far, in 2020.

“Wales is a small country and the rugby community is a real village,” writes Simon Thomas, the veteran journalist. “It often seems as though everyone within the game knows each other’s business and what’s going on.

Hayward’s role was immediately undermined last year by former chief executive Martyn Phillips stating that the WRU would “always want to have a conversation” if Shaun Edwards was available. Pivac confirmed his desire to keep Edwards on the payroll before the Englishman decided to join Fabien Galthié’s French revolution.

“It is an individual choice and probably a financial one,” said Pivac.

Edwards contacted Wales Online to say: “I am disappointed with Wayne Pivac’s comments - he has no idea what my salary is in France.”

Pivac had yet to take over from Gatland.

Sam Warburton did join the new management last November but the former Lions and Wales captain has since departed, citing business commitments.

Gethin Jenkins, the former Lions prop, who only began coaching last year with the Cardiff Blues, is charged with stopping Ireland’s attack tonight, having initially been appointed to replace Warburton as a breakdown specialist.

The village whispers and gossip are constant now. Wales are forced to play at Parc y Scarlets due to the Principality Stadium in Cardiff’s transformation into a field hospital while Pro14 results are increasingly poor.

How Cardiff, Dragons, Ospreys and Scarlets perform rarely transferred to the national squad during Gatland’s reign, but this season the regions have combined for seven victories and 12 defeats. In stark contrast, Munster, Leinster and Ulster are sitting pretty on 14 wins and zero defeats.

“Wayne Pivac is a man with a long term vision and it’s one that will be shared throughout Welsh rugby,” said WRU CEO Steve Phillips. “That vision is for our nation to succeed at the World Cup in 2023... Losing matches is never on the check list. But, having already established a top four seeding at the 2023 tournament, some of the pressure on results necessarily abates.”

Phillips added that Pivac has “drawn a line in the sand” with performances levels expected to rise, starting in Dublin tonight. It reads like the dreaded vote of confidence.

Pivac is an excellent coach. The evidence was clear when the Scarlets ripped through Leinster and Munster to capture the Pro 14 title in 2017.

“Wayne was a copper on the beat before going into coaching,” said Xavier Rush, the former Cardiff backrow. “He carried a gun to do that job and even in the worst-case scenario he won’t need one of those in Wales.”

Maybe so, but the Canterbury Crusaders have already been forced to deny Scott Robertson will be the next Kiwi to begin his drive towards the All Blacks job via Wales, just like Graham Henry and Steve Hansen.

On Thursday Wales captain Alun Wyn Jones, ahead of his record setting 150th cap, was offered several opportunities to give Pivac a ringing endorsement.

Here is how Wyn Jones replied to the suggestion of “unrest in the camp.”

“Unrest is something that can be quite provocative to those that are outside the camp. It’s still a job of work for us. We’re focused and very clear on what we need to do and we’ll stick to that.”

Next, the 35-year-old lock was asked if the players are behind Pivac? “There are always those who get people in their sights but as a playing group we won’t shy away from the pressure. I’ve done this a few times, been in this position a couple of times before and the margins are finite. There will be a tomorrow but we’re very clear in the effort and the plan we have to put it right.”

When asked how responsibility for results is balanced between the players and coaches, Wyn Jones deemed it an “interesting question” before saying: “I guess ultimately the responsibility is shared.”

An easy follow up, are Wales close to clicking or not? “It’s funny. Sometimes the closer you get, the further away it feels...We’ve got a little bit to get right, but we know what we need to know.”

Right so, can we expect a big reaction from Wyn Jones’ team at the Aviva? “From a personal point of view I’d like to have thought we’d have done that already. This is a new competition. In a way it’s a start, but we’re definitely aware of what we need to shore up and I’d like to think there would be a reaction.”