Movement of young players between provinces will increase in the future 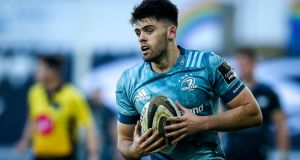 In 2014 the IRFU made a commitment to revamping their elite player pathway with the express purpose of fast tracking the progression of young talent into the senior game; putting a structure in place from talent identification to a framework that facilitated and accelerated player development.

Two years later the Ireland Under-20 side under head coach Nigel Carolan reached the World Junior Championship final and en route became the first Irish men’s national team to beat New Zealand before losing to England in the decider.

Six have gone on to play for the senior Ireland team – Jacob Stockdale (30 caps), James Ryan (28 caps), Andrew Porter (28 caps), Hugo Keenan (two caps), Will Connors (two caps) and Max Deegan (one cap) – while another as yet uncapped player, Munster’s Shane Daly, has been a regular member of Andy Farrell’s national squad.

Johnny McPhillips is currently with Leicester Tigers, Brett Connon at the Newcastle Falcons, Cashel’s Sean O’Connor is on the books of the Jersey Reds, while prop Ben Betts did spend some time at Leicester before retiring from professional rugby. It is an impressive follow through rate from the one group and it could be replicated in terms of the Noel McNamara-coached Ireland U-20 Grand Slam winning squad of 2019 and indeed the unbeaten panel of 2020.

Ireland’s rescheduled 2020 Six Nations Championship matches against Italy and France and the upcoming four Tests in the Autumn Nations Cup that begins against Wales at the Aviva stadium on Friday night (7.0) has allowed the provinces to give game time to younger players.

In this season’s Guinness Pro14 the Irish provinces have played 47 players of 23 years of age and younger while collectively winning 16 of 17 matches in the tournament to date. Leinster – the bulk contributors to the Irish senior squad – lead the way in terms of the age profile under scrutiny with 16 players, Munster, 14, Connacht nine and Ulster eight.

Drilling a little deeper, all 16 players in Leinster have come through their system, 12 of 14 in Munster – Kenyan Knox (South Africa) and Roman Salanoa (Hawaii) the exceptions – while Clonmel-born outhalf Bill Johnston joined Ulster from Munster.

Andy Friend’s Connacht recruited intelligently in identifying and providing an outlet for talented young players having pruned their squad at the end of last season. Jack Aungier, Peter Sullivan and Cian Prendergast supplemented the Leinster-born 23-and-under contingent of Paul Boyle, Sean Masterson and Jordan Duggan in the west of Ireland while Clare’s Conor Fitzgerald, younger brother of Stephen, moved from Munster in 2018.

A breakdown of the 47 players in position terms sees seven props, three hookers, 15 secondrow/backrow, three scrumhalves, seven outhalves not including David Hawkshaw who can play there, while it’s best to group the three-quarter line and fullback as one cadre given that there are a number of players who can play right across a backline.

The fact that the Pro14 will continue to run in tandem with the upcoming internationals will enable Leo Cullen, Johann van Graan, Dan McFarland and Friend to continue to propagate the younger generation; of those listed in the graphic only Leinster duo Ronan Kelleher and Caelan Doris are away on international duty.

Ulster centres James Hume and Stewart Moore – the latter the only player in the 47 to have played in all five Pro14 rounds to date – have impressed while racking up significant minutes, so too Munster’s Gavin Coombes, Fineen Wycherley, John Hodnett, Craig Casey and Ben Healy. Sullivan, Boyle and Aungier have been standout contributors for Connacht.

The challenge for the players across all four provinces is to take the next step and earn a place in the matchday squads for the higher profile Pro14 and Heineken Champions Cup matches; it’s the most obvious route map to Test rugby.

There is little doubt that the system is working well reflected in the quantity and quality of the young players coming through at a meaningful level provincially and nationally, thereby driving competition for places with no drop off in winning league matches.

Movement between provinces, or at least three of them, will increase in the future as players chase starting places rather than squad numbers. To that end next summer’s scheduled Ireland tour to Australia and the Pacific Islands, should it go ahead, could provide a starting point for several of the 47 players listed as Farrell begins to look in earnest towards the 2023 World Cup.