Wisemantel backs Henshaw and Tuilagi to adapt to unfamiliar roles 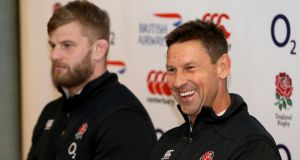 England’s attack coach Scott Wisemantel conceded that he was “surprised” to learn that Robbie Henshaw was selected at fullback for Saturday’s Six Nations Championship match at the Aviva stadium (4.45).

The Australian, who was part of Eddie Jones’s coaching team with Japan at the 2015 Rugby World Cup having previously worked together with the Wallabies, was brought in as the attack consultant for England’s tour to South Africa last summer, a contract that has been extended.

“Look I was surprised but I can understand why,” said Wisemantel. “Right after this I am going to catch up with Andy Friend, the coach at Connacht. I have done my homework; we have looked at his games from when he did play fullback in 2016. I think he is a very good player, so he’ll adapt.”

Wisemantel spoke about England’s reshuffle in the absence of the injured Ben Te’o when pairing Manu Tuilagi and Henry Slade in the midfield, with the Leicester player in the slightly unfamiliar role of inside centre. “You have three class players all together. Ben Te’o drops out and Manu comes in so it is a bit of like with like.

“That’s my job [to make sure Tuilagi’s comfortable and fully prepared]; if he hasn’t then I’ve failed. We have all the confidence in the world in Manu. I don’t think it’s that big a challenge [switching between inside and outside centre]; he has great players either side of him. Henry [Slade] has really grown into that 13 role. Owen [Farrell] is world class.

“He [Tuilagi] feels pretty comfortable there. He is fit and well and in a good headspace. There is no reason for us to fear playing him at 12.”

There is rarely a reference to Ireland these days without an acknowledgement of the Ireland’s preferential player management programme. Wisemantel said: “They [Ireland] are a very well organised team, well coached. They have very good players that have played a lot together, which I think is one of the advantages with the system here in Ireland; a small pool where they get continuity.

“I think that consistency of combinations for them is something that you will see and they can hold the ball for a long period of time. We saw it in last year’s Six Nations, the game against France, right at the back end where they had to hold the ball and went the full length and won the game. They are an outstanding team.”

The Australian will pit his wits against Ireland’s defence coach Andy Farrell. He explained that he “tapped into” England forwards’ coach Steve Borthwick’s knowledge of Farrell from their time together, particularly on the Lions tour. What Wisemantel gleaned will be revealed tomorrow evening.

A familiar narrative in the build-up has centred on Ireland’s kicking game and it got another airing. Wisemantel described it as “very shrewd.”

He expanded: “That comes with the combinations, they play a lot of rugby together and a lot of high-class, pressure rugby which means you have to have a high-class kicking game; whether that’s from nine, 10 or on the edges – they kick well.”

England secondrow George Kruis provided a player’s perspective on the match, singling out Peter O’Mahony and Devin Toner in reference to the lineout before offering a brief synopsis of where they game will be won and lost.

“Up front and the kicking game, those two areas are going to be huge,” said the Saracens lock. “It’s a great stadium to play at. These are the games that you realise that it is a privilege to play in.”