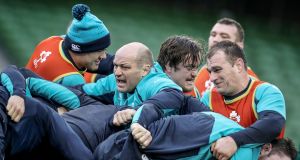 Robbie Henshaw’s switch to fullback, for the first time at international level in more than six years and dating back to his debut four days before his 20th birthday, is certainly a headline grabber, and unusually so for an Irish side. By Joe Schmidt standards, it seems almost wild and whacky.

But it needs to be viewed in context. Henshaw’s switch is a gamble, but an exciting one, and as Schmidt outlined yesterday it is something the Irish management have been looking at in training and had intended employing as far back as November 2017.

Having Bundee Aki, Henshaw and Garry Ringrose all fit and available simultaneously, and so faced with the riddle of perming two from three, Schmidt has opted to play all three.

The Ireland coach admitted that he had had one eye on the World Cup, when he will be restricted to 31 players

Schmidt cited Henshaw’s “game intelligence”, aerial skills “akin to Rob Kearney”, incredible defensive commitment and attacking smarts both as a carrier and a link player, to give him “the full spectrum of skills required to play the position”.

Nor, according to Schmidt, was Henshaw remotely put out.

“I tell you what, if I said to Robbie: ‘Look Robbie, I’m thinking about putting you at number ‘8’’ he’d look a bit bemused but he’d say: ‘Yeah, yeah, I just need to get the calls. I’ll see Feeky [scrum coach Greg Feek] and make sure I’m nailed on at scrum time’.”

“He is a solutions man. He’s not a ‘that’s a problem for me’,” added Schmidt. “It’s hard to say he’s going to have all the solutions on Saturday because I think everything is a progression, and nothing is linear. Progressions have dips and troughs, and there’s going to be some challenges for him during the game and during the tournament if he stays there, or if Rob Kearney comes in there, or if Jordan Larmour or Will Addison play in that position.”

The Ireland coach admitted that he had had one eye on the World Cup, when he will be restricted to 31 players, with this decision and that time had run out this week on Rob Kearney, who was rusty in returning from a quad injury for Leinster last weekend, but “certainly” wouldn’t advise writing off the 32-year-old. Even so, if Henshaw has a big game tomorrow he’ll be the man in possession.

Henshaw also returns to what is a very settled side. The only other change to the starting XV from the historic win over New Zealand in November sees the fit-again Conor Murray returning at scrumhalf. There were a couple of close calls on the bench, where David Kilcoyne and Sean O’Brien have been preferred to Jack McGrath and Jordi Murphy.

As well as the inevitable collective rustiness that comes with a Six Nations opener, some individuals are also short on game time.

Schmidt admitted this was more of a concern with Henshaw, who’s had one 62-minute run-out since November, than his switch to fullback. Similarly, this will be Johnny Sexton’s first game in five weeks and O’Brien has had one 56-minute outing since November.

England have picked a strong and potentially adventurous side, with Henry Slade’s creative skills retained alongside the recalled Manu Tuilagi, who will make his first start in the Six Nations for six years, and Jack Nowell returning to a back three where Elliot Daly, despite loss of form with Wasps, is retained at fullback.

The fit-again Mako Vunipola and George Kruis return to an all-Lions tight five, as does the former’s brother Billy, in three of six personnel changes, with Mark Wilson shifting to blindside flanker compared to the side which beat Australia 37-18 in November.

It is a measure of the contrasting state of flux between the two that Ireland retain 12 of their starting line-up from their Twickenham coronation on that Baltic St Patrick’s Day 10 months ago, and 16 of their match-day squad, whereas England retain six of their XV and eight of their 23. Exactly double on both counts. Whether that actually counts for anything we’ll soon discover.

On the three occasions Ireland have won their opening Six Nations game under Schmidt’s watch, they went on to win the title. The two times they didn’t win, they finished second and third. With England focusing the minds on opening weekend for the first time since 2000, and first time in Dublin since 1995, Schmidt is experiencing some familiar feelings.

“It’s a hell of a tournament. I think the championship is incredibly special. It’s a mix of exhilaration, excitement, anxiety, trepidation – you could throw a whole lot of almost paradoxical phrases in about how I see the first round of the championship.

“But whatever it is, it’s pivotal and it always is pivotal. Can you win the championship and lose the first game? Yes. The maths say you can but that would be a hell of an achievement if you manage to do that and I’d rather not be trying to work those mathematics out. It wouldn’t be a strong point of mine. I’m an ex-English teacher. I’ll do the words, not the maths.”

Well, for the record, only three times since the introduction of points difference in 1994 to determine final standings in the event of teams finishing level has a country won the title after losing on the opening weekend.

England did it in 1996 after losing in Paris, France in 2006 after losing in Murrayfield and Wales in 2013 after an opening 30-22 defeat to Ireland in Cardiff to claim the title with a last-day 30-3 win over England in the Millennium Stadium. By contrast, Ireland would not win another game and finished fifth.

In all bar three of the last 25 years though, the ultimate champions won on the opening weekend.