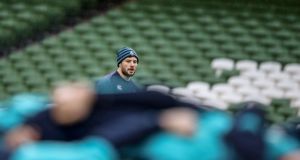 England perform at their best when there is blood dripping off their chins from a swollen nose that has just been joyously smacked.

In last year’s championship England did not have the mindset of an angry bloody-nosed player. Instead, they exuded an attitude of entitlement. Disaster is never far away when athletes think they are entitled to victory.

One of the great trademarks of Clive Woodward’s teams was their palpable hunger to prove themselves at every match. A mindset of determination. The England team of 2018 had none of that.

When Scotland and France landed solid body blows on England last year, and Ireland delivered the coup de grâce at Twickenham on St Patrick’s Day, entitlement was replaced by humiliation.

Eddie Jones is an excellent coach. He has an outstanding record on the international stage including reaching a World Cup final as a head coach of the Wallabies and winning the Webb Ellis Trophy as an assistant to Jake White’s Springboks.

However, I can’t help but feel that his long-running comedy act with the media has contributed to the mindset problem in his team.

Eddie’s media policy of late is to tell stories to the press and send them off on wild goose chases. You only have to look at last week’s yarn when Jones said he was considering playing winger Jack Nowell as a “new breed of player” at openside flanker.

I could imagine Eddie sitting back having a great laugh as some sections of the media took it seriously.

But if this media sideshow has been a distraction in the English minds, that brings in doubt. That is a weakness that needs to be purged.

Since winning at Twickenham Ireland have achieved historic victories over Australia and New Zealand. England lost their summer series to the Springboks and lost to New Zealand in November.

And here’s the rub. The England of 2019 are a better version than the 2018 team and have shown they can compete with any team in the world. Their mindset has changed. The arrogance has diminished and self-belief has returned.

The statistic that teams don’t share is how they internally rate their conditioning and fitness. From observations of club and national team performances, we know that Irish players are supremely conditioned.

Jones has identified that his player’s fitness and ability to perform under intense pressure is not at the standard required to win a World Cup. He has rightly pushed fitness and wrestling skills to his players at the England training camps. Jones wants to utilise wrestling techniques to slow down the Irish ball carriers' ability to place the ball quickly and buy time for the defence to organise. England’s fitness will have improved but I don’t believe they have bridged the gap.

England will face an Irish attack that was eloquently described by New Zealand assistant coach, Ian Foster, as “a willing reliance on patterned play, capable of shaping a game towards a narrow band width of strategy . . . a team that is trying to suffocate you with possession”.

England defence coach John Mitchell’s interpretation was much easier to comprehend when he said the Irish attack “will try to bore the shit out of us”.

John is a great guy and an excellent coach, but he’s unlikely to have a future as a diplomat. I agree with John. Yes, Irish phase attack is very boring, but it is also highly efficient and wins matches.

Robbie Henshaw’s selection at fullback is a surprisingly high-risk move by Joe Schmidt. Henshaw is a class act, but any centre, no matter his quality, who has not played fullback for club or country in four years will be under huge pressure. England’s kicking strategy will be to put Henshaw under as much pressure as possible.

Owen Farrell must kick, keeping the ball in play, to pressure Henshaw and keep Ireland pinned in their own half. This will deny Ireland attacking lineouts, because this is where the Irish want to start their attack.

England must also stay highly disciplined and limit their penalty count. Then they must make over 120 tackles, all with great line speed, total physical commitment, then slow the rucks down to deny Ireland ‘quality fast ball’.

England’s attacking hopes hinge on a game of extreme physicality from Maro Itoje, Billy Vunipola and Manu Tuilagi. These big ball carriers must win the corridor of power and cross the gainline to get Farrell on the front foot.

It is not an impossible task, but very close to it.

Whatever team wins today will have one hand on the Six Nations trophy and a giant psychological advantage going into the World Cup. As we say in Australia “they are playing for sheep stations”.

Today is the Six Nations at its absolute best. A celebration of rugby, where Ireland should prevail against an improving English team with blood dripping from their collective chins, and revenge burning in their hearts.