Six Nations: Ireland v England - all you need to know 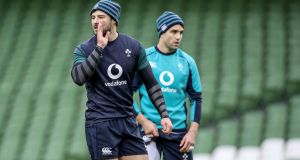 Ireland start off their Six Nations defence against England, the old enemy, and the hosts are hot favourites. All four Irish provinces are into the knockout stages in Europe, 2018 brought with it a Grand Slam, a first ever home win over the All Blacks and a series win in Australia. England meanwhile finished fifth in last year's Six Nations and lost their series 2-1 in South Africa.

There’s live coverage of the match on Virgin Media One from 4.30pm and UTV from 4pm. We’ll also be blogging the build-up and all of the action from 4.15pm at www.irishtimes.com/sport.

As you’d expect for a game of this magnitude, Saturday’s match is a sell-out.

Joe Schmidt has decided to go with the team that beat the All Blacks last year, other than Robbie Henshaw coming in at fullback and the fit again Conor Murray returning at scrumhalf. It’ll be only the second time Henshaw will have played at 15 for Ireland, but he’s been favoured over Rob Kearney who looked rusty in returning from a quad injury for Leinster last weekend. There’s no place for either Kearney or Jack McGrath among the replacements.

Eddie Jones has gone with a centre partnership of Henry Slade and Manu Tuilagi, playing together for the first time - it’s the latter's first start in the competition for six years. England's pack includes an all-Lions tight five, and brothers Billy and Mako Vunipola return.

Injuries to Kieran Marmion and Luke McGrath have opened things up for Ulster scrumhalf John Cooney to come in as back up for Murray. Quinn Roux also makes the bench - despite not making the initial Six Nations squad - because of injuries to Iain Henderson and Tadhg Beirne.

England are without the leadership of co-captain Dylan Hartley, as well as other big players such as Sam Underhill and Anthony Watson. Underhill had been in terrific form for club and country in 2018. Former Leinster centre Ben Te’o misses out also, as does Brad Shields, Chris Robshaw and young wing Joe Cokanasiga.

Man in the middle

Jerome Garces will referee Ireland’s opening match against England. According to Irish Times rugby reporter John O’Sullivan: “the Frenchman is one of the top officials in the game, with a sympathetic style from a player’s perspective and his appointment should be embraced by the protagonists.”

There are to be clear skies in Dublin on Saturday afternoon, the sun will be out for spells but temperatures are to be down at three degrees. Wind speed is to be 13km/h.

I’m always worried about Ireland coming in as favourites . . .