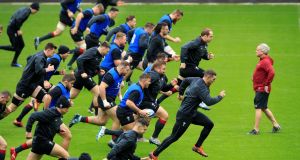 Friday night openers still don’t feel right, but this Parisian match-up ought to make for interesting viewing in Paris and abroad, and ensure the 2019 Guinness Six Nations hits the ground running. It is also likely to have a huge bearing on how their respective campaigns pan out, for there is abundant logic, as well as bravado, in Warren Gatland’s claim that if Wales win this match they can go on and win the title.

Logic also points to a Welsh win. They have the form, both recently and in this fixture, as well as consistency of selection. But then logic, or indeed form, rarely applies when les bleus are involved.

Wales have actually won this fixture six times in the past seven years. Furthermore, they completed their first ever autumn Test series clean sweep with victories over Scotland, Australia, Tonga and South Africa in November 2018 to end the year with nine successive wins.

By contrast, as ever it’s almost impossible to know what to expect from France. Strong or weak autumnal performances don’t necessarily translate into the same come the Six Nations.

Perversely, it is the utter shame and wounded sense of pride of losing last time out against Fiji here that might prompt a particularly fired-up response from les bleus, all the more so if the Stade de France starts reverberating to la marseillaise. Against that, the almost embarrassing Fijian endgame wasn’t the first time of late that France lost their nerve in a tight finish.

Only the French could name a squad without a single member of the backline that started the opening game against Ireland 12 months ago and yet field a combination with such a mix of experience and youth, not to mention attacking promise.

One of the potential flaws in having such a conveyor belt of scrumhalves especially is to settle upon a regular halfback partnership. In his troubled reign, Philippe Saint-André selected 17 different halfback combinations in his 45 matches, and Guy Novès picked seven in his 21.

In Jacques Brunel’s first game as head coach, against Ireland a year ago, he gave the then 19-year-old Matthieu Jalibert his debut outside Maxime Machenaud. A year on Machenaud hasn’t made the squad, Jalibert is injured and Brunel has opted for the Clermont pairing of Morgan Parra and Camille Lopez – his sixth different combination in 12 matches.

Rather remarkably, Parra and Lopez are re-united for les bleus for the first time since the corresponding game against Wales four years ago, when France lost 20-13. But, in the unlikely event of Parra and Lopez having a run of games together, it could go a long way toward improving France’s mundane Six Nations record of late.

Since finishing second in 2011, after winning the Grand Slam the year before, France have managed just one top-half finish in the last seven years, when finishing third two seasons ago.

In any event, a year on, Brunel has given a debut to another 19-year-old, namely the Toulouse Under-20 World Cup winner Romain Ntamack. For all his creative talents, the slightly built Ntamack is likely to have plenty of Welsh traffic coming down his channel, for as his recent outing against Leinster in the RDS highlighted, defence is not his strong point.

That traffic would have been all the more dynamic if Taulupe Faletau hadn’t been sidelined, and with Rhys Webb in exile in Toulon and Dan Biggar on the bench, the Cardiff halfback pairing of Tomos Williams – making his Six Nations debut – and Gareth Anscombe adds to the less proven make-up of this Welsh team.

That said, they still look the better team, and better coached, although France also have plenty of ballast in their enormous pack, which is virtually a stone per man heavier than their Welsh counterparts.

The presence of Wayne Barnes will revive memories of the corresponding fixture here two seasons ago on the last weekend. Barnes was the referee that day too, when Lopez’s conversion of a try in the 100th minute by Damien Chouly sealed a 20-18 French win.

“Two years ago I had already come off and I was sitting on the sidelines as a fan,” recalled French captain Guilhem Guirado. “I hope there will be no repeat. Wales is very dangerous and their defence is especially strong. It will be a huge challenge.”

It remains France’s only win over Wales in the last seven years, although except for Rome, away wins seem to have become as rare as hen’s teeth in recent years. Wales haven’t done so in the last three seasons. It’s a hard one to call. The bookies can’t split them. France look more brittle. But, beaten last time out at home by Fiji, it would be so French to turn that around.