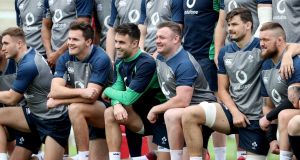 The winds of change have been gently sweeping through the Irish squad in the moderate climate of the Algarve this past week. Nor has this been confined to Andy Farrell making five changes in personnel from the starting XV from that anti-climactic exit to New Zealand in the World Cup quarter-finals for Saturday’s 2020 Guinness Six Nations opener against Scotland.

It says everything about the rich potential and form of Caelan Doris that Farrell has handed the Leinster number eight a debut and, off the bench, his fellow 21-year-old Ronan Kelleher. Rob Herring will make a belated Six Nations debut, at fullback Jordan Larmour makes just his second Six Nations start and Andrew Conway his first on the wing, while Bundee Aki returns at inside centre.

CJ Stander has shifted to blindside, with Robbie Henshaw and Peter O’Mahony dropping to the bench, where Kelleher has the additional security of the recalled Devin Toner. John Cooney and Ross Byrne, who didn’t make the World Cup, are the back-up halves.

It looks like an exciting, refreshed team, picked on form, allowing for the vexed scrumhalf selection. But Conor Murray has returned to form in recent weeks and has huge credit in the bank.

Ironically, though, all but two of this starting XV strangled Scotland in the sides’ opening World Cup pool meeting, the exceptions being Herring and Doris.

However, after unveiling his first selection at the squad’s base in Quinta do Lago on Tuesday, Farrell also gave his most revealing thoughts yet on what he wants to see from this Irish team under his watch.

“I want to see the good old traditions of what all champion Irish teams have always been about. We want to be a team that the Irish public love watching. The traditional parts of those champion teams have always been a dominant forward pack, an aggressive forward pack, unbelievably hard to handle. I’ve been on the other side of that myself. A backline that facilitates that for a forward pack and also takes advantage of what the forwards are doing for them.

“That’s going back throughout history. Those are the essential parts of the game. The little bits we’re trying to build, they will take time, we’ll see how they progress over the next while, but hopefully before not too long we’re talking about our own history as well.”

The essentials in preparation, he believes, are game understanding and management, planning for the opposition, while also achieving the right emotional pitch from Thursday onwards.

In all of this, Farrell has been profoundly influenced by his one game for England against Ireland, when the Sweet Chariot was derailed 43-13 at Croke Park by a home side motivated by an initial defeat by France and, well, by all manner of historical connotations.

“I’ve talked about this before, I think that was the perfect performance. I’ve spoken to the lads about what I believe Irish rugby has been all about in the past. That has certainly influenced my mind. That performance – they had to win, they had to perform. To do it under that much pressure in the manner they did – with forward domination, subtle play, making sure emotion didn’t get in the way of playing the game as it should be played. I thought they were outstanding that day.”

“Everything was wrong about that game,” recalled the then English coach Brian Ashton years later, “but everything was right about Andy. Here was an individual of real character who was capable of showing his qualities as a leader – his qualities as a man – in a situation of the greatest sporting adversity. He was one of those who didn’t crack.”

I look back and that’s what being a coach is about: caring, being the right mentor

Farrell has been planning this first week in charge for a while and said, “I’ve loved every bit of it so far,” while acknowledging, “I can’t get too ahead of myself, it’s Tuesday in the first Test week, we’ve not kicked or passed a ball in proper anger yet. I’ll know more after the weekend.”

He said he’s always thought of games with the mindset of a head coach and what he might do differently “just for my own peace of mind more than anything; obviously, I’ve got one eye on my own future.”

Farrell said he could have talked all day about the coaches who have influenced him along the way, starting with his first amateur coach in rugby league, Haydn Walker, who drove him to training and looked after him at weekends.

“I look back and that’s what being a coach is about: caring, being the right mentor.”

He then cited his first professional coach at Wigan, Graeme West, who played on until 45, in part to look after young kids like Farrell coming through.

“He coached Wigan for just one year. There were five trophies to go for and he won all five. Why? Because he’s a great bloke and people wanted to play for him.”

“When I look at the best technical coaches I’ve had, I compare whether they’ve got the man-management and the emotion right and whether they can combine everything that makes a great coach. That’s why it’s so hard to piece it all together. I suppose I have a lot of thoughts about how I want to be and we’ll see how that goes.”

Farrell also broke with custom by revealing his hand fully 48 hours before was obliged to do so, whereas Joe Schmidt was obsessed about his selection not being leaked any sooner than Thursday.

“There is a little bit of paralysis through analysis,” said Farrell. “You can look too much into things the whole time. It doesn’t bother me about putting a team out there ’cos that’s all I’m bothered about, our team – backing ourselves. There’s been a real focus on us this week. We’ve been in this game long enough now to know the advantages and disadvantages. And I almost feel it’s like zero. So I’d rather just get it out there and get on with the week.”

As part of what he wants to see as a more inclusive squad, Farrell also revealed that Tadhg Furlong, James Ryan and Garry Ringrose have been co-opted onto the leadership group alongside captain Johnny Sexton, O’Mahony and Iain Henderson.

1 Gerry Thornley: England primed to show their best against Ireland
2 Should fans be allowed drink in the stand at sporting events?
3 Stopping Jonny May’s pace must be high in Ireland’s priorities
4 Tipping Point: Eddie Jones’s rhetoric is out of place in a febrile political climate
5 Irish Open: How to get there, how to get tickets, where to stay
Real news has value SUBSCRIBE

Willie Mullins prefers to ‘keep it simple’ and run Benie in Mares Hurdle 06:00
Stopping Jonny May’s pace must be high in Ireland’s priorities 06:00
Monaghan and Mayo face off with relegation a real prospect 06:00
Should fans be allowed drink in the stand at sporting events? 06:00
Gerry Thornley: England primed to show their best against Ireland 06:00
Here is your handy guide to sport on television this week