Sene Naoupu: ‘I believe we’re on the verge of something special this season’ 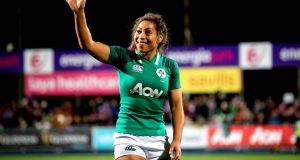 Ireland’s Sene Naoupu waves to fans after last year’s Women’s Six Nations Championship Round 4 match against France at Energia Park, Donnybrook, Dublin 4. ‘When I pull on that green shirt, when I hear that anthem, oh gosh, the emotion of it takes you to another level.’ Photograph: Ryan Byrne/Inpho

The first two years of Sene Naoupu’s international career with Ireland, which began in 2015, had a dreamlike quality to them. In her debut season she was part of the team that won the Six Nations, and 12 months later she was named the Rugby Writers’ Player of the Year. She would have been forgiven for concluding that international rugby was a breeze.

Since then, though, it’s been a little more on the stormy side. In 2017 there was the dejection that surrounded the team’s showing in the World Cup on home soil, with plenty of recriminations in its aftermath, and last year they had their lowest Six Nations finish – fifth – in over a decade. In all, they’ve won just three of their last 10 Six Nations outings.

Naoupu, then, has just about experienced it all.

But for a woman who has surmounted the most difficult of tests in her own life, she’s not one to be bowed by a sporting challenge, and while most might look upon Ireland’s 2020 Six Nations campaign as something of a rebuilding exercise, she feels it can be much more than that.

“I genuinely believe we’re on the verge of something special this season,” she says. “In the last few years . . . look, it was what it was. The challenge for us since has been to redefine ourselves as a squad, build and move forward into 2020, starting with the Six Nations and ending with the World Cup qualifiers in September. It’s a big year for us, but I think we’re ready to take it on.”

Much of her belief is based on the work the squad has done in the build-up to their Six Nations opener, against Scotland (now coached by Philip Doyle, who was in charge of Ireland when they won the Grand Slam in 2013) in Donnybrook on February 2nd, which included training camps before and after Christmas, some in conjunction with France and Scotland, as well as a 22-12 victory over Wales in their final warm-up game.

Throw in the new blood that coach Adam Griggs introduced to his extended panel, with five uncapped players initially included, and the “energy” they brought with them, as well as some changes to the backroom team, and that, says Naoupu, is why she has only positive thoughts about the campaign. Even if it includes away trips to England – the defending champions – and France.

“Steven McGuinness [forwards coach] and Kieran Hallett [defence] came in, as well as a new strength and conditioning coach, Orlaith Curran, and it’s been fantastic, all the changes have been seamless. We’ve really been enjoying learning a lot around our new attack and defence systems – as players we’re all excited about that, those sessions have been invaluable for us.

“And the new girls coming in came in for a reason: they’re good enough, they’re well able to perform at international level. There’s so much competition for places across the whole squad, which is fantastic for all of us. We’re pushing each other to be better players.”

She is, she admits, her own worst critic. “I probably have an unhealthy obsession with wanting to be better,” she laughs, although her husband George, a fellow New Zealander and a Connacht old boy, isn’t slow to point out the faults in her performances either. He knows by now, though, how to get his timing right.

“He’s really supportive, he knows that I always want to be better, but he also knows me well enough to know when to bring up certain things – to leave it for 24 hours before he mentions something,” she laughs. “But I learn a lot from him, he gives me an insight that really helps me as a player.

“Rugby is such a big part of our lives and has given us some wonderful experiences. We’re both incredibly grateful, especially for the opportunity to come to Ireland in the first place. To be able to be part of the community and the culture and to love the country as much as we do. When I pull on that green shirt, when I hear that anthem, oh gosh, the emotion of it takes you to another level.”

Since becoming an Irish international, Naoupu has used her standing to powerful effect by speaking openly about her past struggles with anorexia and depression, becoming a member of the board of Bodywhys, the Eating Disorders Association of Ireland.

“And with that comes a responsibility of ensuring that you give hope based on your own experiences to those who might be suffering and not realised that others had suffered too and overcome it. It’s about encouraging conversations about being vulnerable, being able to open up, because without those conversations you can’t change it, it will stay the same.

“It’s about educating people and making them aware of the support systems that are out there – and they are there, you just have to reach for them and things can get better. They will get better.

“And sport has been such a huge part of my journey, I can’t begin to describe how positive an impact it has had on my life. More than anything, it’s about the friendships you build, like the ones I have now with Ireland. In this squad, we are sisters.”

Sene Naoupu has teamed up with Guinness in their campaign to urge support for the Irish women’s team in their 2020 Six Nations campaign. Ireland’s away games against England and France will be screened live at the Guinness Open Gate Brewery.