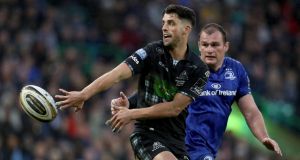 Jones feels Russell’s exit, following a drinking session that saw him ruled out of contention to face Ireland, has had more impact outside the Scotland camp than in it.

Hastings is set to start in the Six Nations opener on Saturday (Aviva Stadium, 4.45pm) and Jones believes the 23-year-old is ready to make his mark on the international arena.

“I would say the media and public are making more of a meal of the story than us,” Jones said. “If you ask the players, none of us are really that bothered about it. The focus is on the guys who are in the squad.

“Adam is one of my best mates at Glasgow and, as soon as Finn left, we all just got behind Adam and focused on the weekend. He is a quality player. He obviously hasn’t had a lot of games at international level. He had a start against Russia in the World Cup when he went really well. I think this could be a great opportunity.

Back in the frame

“He has been on form for Glasgow this season, has had a couple of really good games, and this could be the opportunity that really sets him up. I think he will go really well.

“He won young player of the year in the Pro14 last season and on the back of that he has matured a lot, his game management has improved. He is still the same silky player he was last season but he has added more to his game.

“His kicking has been brilliant this season and he is a pretty good defender as well. I think he has got all the attributes you need and with the team around him, I think he will go really well.”

Jones is back in the frame after being cut from the squad just before the World Cup. And the 26-year-old is enjoying Scotland’s new-look build-up at a training camp in Spain.

“It’s been good to be in a focused environment with no distractions around here,” he said. “We are off on Wednesday but we are all around and the new faces can ask any questions that need asked so everyone is on the same page come the weekend. The warm weather has been good as well. It’s been really beneficial.”