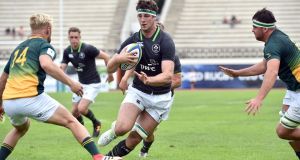 A second defeat for Ireland in the Under-20 World Championship and this one will hurt for a different reason to the opening day loss to France. The Irish team will be disappointed with the imprecision that dogged their play in the opening half an hour and the concession of a couple of soft tries that handed South Africa an early ascendancy on the scoreboard.

Noel McNamara’s side did fight back from 12-0 down to lead 17-12 early in the second half, primarily through the excellence of their outstanding number eight and captain Caelan Doris, but being penalised half a dozen times at the scrum provided South Africa with a platform to dominate possession and territory after the interval.

South African centre Wandisile Simelane crossed for three tries after the re-start as Ireland ran out of steam in the final quarter, courage not enough to stave off another defeat. They will face Georgia in their final pool match hoping to secure a win that would allow them to compete for fifth to eighth places in the crossover phase of the tournament.

Ireland’s periodic sloppiness first surfaced with the game just 28 seconds old when scrumhalf Johnny Stewart had his clearance kick charged down by his opposite number Zak Burger, the South African quickest to react and dot down for the first try of the game. Damian Willemse added the conversion.

A failure to execute the basics permeated all aspects of Ireland’s play - patterns, handling errors, conceding penalties and turnovers at the set piece or scrum and lineout, some poor kicking and wayward passing - but despite these handicaps, and Tom Roche losing control of the ball over the South African line in first half injury time, Noel McNamara’s side still managed to rescue a poor start and dominate possession.

Trailing 12-0 after conceding a second try to Muller du Plessis, Ireland struck back initially through a Conor Dean penalty and then a try from the outstanding Doris, converted by the outhalf to leave them trailing 12-10 at the interval.

In Doris, O’Brien, Dean and Michael Silvester, they had players who put a bit of shape on Ireland’s attacking patterns and provide momentum while Jack Dunne was outstanding up front.

Ireland cut down on the errors, dominated possession and forced their opponents into conceding a rake of penalties and losing a player to the sin bin.

Dean landed a 30-metre penalty and then tagged on a conversion to a fine try from Doris off a five metre scrum. Ireland could have gone in ahead at the break but Roche lost control in the tackle as he went to ground the ball one-handed over the line.

Ireland’s captain and number eight made two brilliant breaks early in the second half and from the second Michael Silvester finished beautifully. Dean converted to nudge Ireland 17-12 in front but a brace of tries for South African centre Simelane changed the complexion of the match. Fullback Gianni Lombard kicked a penalty to put the ‘Baby Boks’ two scores ahead.

Simelane grabbed his hat-trick of tries with four minutes remaining, the physical wear and tear taking a huge toll on Ireland in the final quarter.