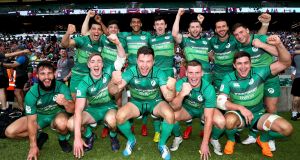 Ireland capped off a historic weekend by beating England 21-19 at the death to secure bronze in the London Sevens at Twickenham.

The win comes after Anthony Eddy’s side reached their first ever Rugby Sevens Cup semi-final on Sunday - a landmark fixture which ended in a heavy 38-12 defeat to World Series leaders and tournament winners Fiji.

Anthony Eddy’s side play their rugby on the second-tier challenge circuit, and earned their place at the competition through invitation.

However they made history at English rugby HQ, progressing to the last four of the Cup competition for the first ever time.

Despite being well beaten in the semis Ireland ended their weekend with a famous win over the hosts, with Mark Roche holding his nerve to convert Jordan Conroy’s last minute try.

Ireland flew out of the blocks against England, with Conroy crossing in the first minute, before he added another three minutes later.

England hit back with a brace of tries before the break, but a missed conversion meant Ireland had a slender 14-12 lead at the interval.

A converted score from Dan Norton early in the second half gave England a 19-14 lead which they defended until the game’s last play - however hat-trick hero Conroy and the nerveless Roche gave Ireland victory at the last.

Ireland had qualified for Sunday’s quarter-finals after finishing second in a pool containing Australia, Wales and Spain - a handsome 38-10 win over the Spanish seeing them progress into the last-eight of the Cup competition.

They then produced a major shock on Sunday morning, as tries from Jordan Conroy, John O’Donnell, Hugo Keenan and James O’Brien gave them a 22-10 win over the USA.

Ireland faced an uphill battle against the mighty Fiji in the semi-finals and were ultimately blown away by the Olympic gold medallists.

Eroni Sau opened the scoring in the first minute, before Josua Vakurunabili crossed in the fourth. Sau touched down for his second a minute later,to give the Fijians an imposing 19-0 half-time lead.

Fiji picked up where they left off at the start of the second half with Josua Tuisova extending their lead, before Terry Kennedy hit back for Ireland, showing blistering pace to scorch down the left touchline and score.

The Fijians then rattled off scores from Kalione Nasoko and Amenoni Nasilasila before Hugo Keenan added one final consolation for Ireland. That was, until, they met England in the bronze medal match.

Brooks Koepka: ‘I should probably win’ US PGA Championship 09:32
Stirling and Balbirnie inspire Ireland past England, European football resumes 07:47
Seán Moran: Boylan documentary offers a compelling insight into former Meath boss 06:30
England face up to sterner test as Pakistan enter the bubble 06:00
Nhat Nguyen rallies round his family as dreams put on hold for now 06:00
Crossword Get access to over 6,000 interactive crosswords