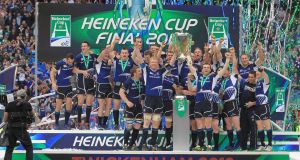 European rugby’s blue riband club competition will be renamed the Heineken Champions Cup from next season.

Europe’s premier club knockout tournament was called the Heineken Cup between 1995 and 2014, with Toulon beating Saracens in the last final before it became the European Champions Cup.

The Champions Cup is a 20-team competition and was won this season by Leinster, following victory over French club Racing 92 in Bilbao.

EPCR chief executive Vincent Gaillard said: “We have substantially developed the Champions Cup over the past four seasons, and it is fitting that at such an exciting time for the tournament we welcome back a world-leading brand in Heineken.

“They are steeped in rugby history and inextricably linked with the heritage of European club rugby, and we are delighted to be embarking on this journey with their full support.”

Next season’s Heineken Champions Cup final will be held at St James’ Park, Newcastle, with the pool stage draw taking place in Switzerland on June 20th.

Heineken global sponsorship director Hans-Erik Tuijt added: “Heineken is proud to have had a close association with rugby for over 20 years, and we look forward to working alongside EPCR to provide a platform to continue to develop the competition across Europe and beyond.”