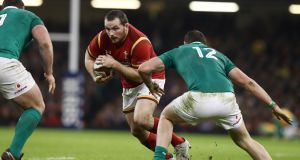 Ken Owens will win his 50th cap for Wales against France in their final Six Nations match this weekend. Photo: David Rogers/Getty Images

Wales will field an unchanged team for their Six Nations finale against France in Paris on Saturday.

It means that Bath forwards Luke Charteris and Taulupe Faletau remain among the replacements as Wales target a sixth successive victory over Les Bleus, while hooker Ken Owens will win his 50th cap.

If Wales win — and England beat Ireland in Dublin on Saturday — then Howley’s men will secure a top-four world ranking place ahead of the 2019 World Cup pool draw in May.

Scarlets forward Owens has been one of Wales’ form players this season, and he follows flanker Justin Tipuric in clocking up a half-century of appearances after the latter reached the milestone against Ireland.

Despite suffering successive Six Nations defeats to England and Scotland this season, Wales are now targeting a top-three finish, while they could even secure the runners-up spot behind England if they win and other results work for them this weekend.

Howley said: “I was delighted for the players about Friday’s result and performance, and they deserve the opportunity to build on that in our final Six Nations encounter.

“The experience we showed and the intensity we brought to the match was hugely important, and that will be just as important as we face a good France team at home.

“We put pressure on ourselves and turned that pressure into a result.

“For us, there are areas of the game we want to work on from Ireland, and we have an opportunity to do that on Saturday and finish the campaign with another quality performance.

“The players who took to the field at the Principality Stadium deserve the opportunity to start, and we were pleased with the impact from the bench, so will be looking for the same this weekend.”

Wales have toppled Les Bleus five times at Stade de France, with their last defeat there being a 28-9 reversal in 2011.