Tadhg Furlong aiming to take out his frustration on England 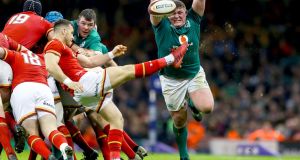 Ireland’s Tadhg Furlong attempts to block down a kick from Rhys Webb of Wales at the Principality Stadium in Cardiff. Photograph: James Crombie/Inpho

Post-match review, pre-game analysis and sandwiched in between are training sessions where theoretical and aspirational meets practical.

It’s about deconstructing the mechanics of the performance to reveal the fault lines. Defeat invariably demands a longer ‘to-do’ list. This week isn’t really a time for talking because no matter’s what is said it’ll have a slightly hollow ring when measured before the acoustics of Saturday’s Test match.

It’s the sound check ahead of the concert; the play list is revealed but will it be as good on the day? The Irish players are therefore in an invidious position because the time for action is still a few days away and for now in its place is a vacuum. Thursday team announcement will offer a welcome distraction from the abstract.

To a man, players and coaches, talked about ‘tiny margins,’ when reflecting upon the defeat at the Principality Stadium last Friday night. They hold forth about fine-tuning, refining, learning, about being more accurate and cutting out the mistakes, all of which is admirable in intent.

The problem is in convincing the sceptics who have yet to shake off the fug of disappointment.

In some respects it’s interesting to sit back and listen to the players field an endless seam of questions about stopping England’s Grand Slam bid and denying them a world record 19 successive victories.

Those in the Irish camp, at least publicly, aren’t buying into that rhetoric. The players want to win the game for themselves, the coaching team and the supporters; they’ll take anything else that rides on the coattails of a victory.

The week is broken down into segments, from the review of the Welsh game to Thursday morning’s training session when members of the extended Ireland squad get to be ‘England’ for somewhere between 70 and 90 minutes.

No one is spared in the analysis from Cardiff and that included tighthead prop Tadhg Furlong, who has at least retained a sense of humour when asked to comment on potentially having an opportunity to score what might have been a match-winning try.

Furlong’s most recent memory of England was playing 10 minutes as a loosehead prop – the only time he has done so professionally – in a 2015 Rugby World Cup warm-up match but going back further, and all things are relative, for someone who is 24-years-old, he has one or two memories of clashes between the countries.

He was only seven, but recalls when Keith Wood ran over the top of Neil Back at the tail of an England lineout at Lansdowne Road in 2001 to deny the visitors a Grand Slam. But unsurprisingly he can’t dredge any memory up of when, two years later, England came to Dublin and administered a good old spanking before taking home all the baubles from that year’s Six Nations.

Reminiscing about Ireland’s victory over England in Croke Park (2007) Furlong added: “I remember watching it at home. [Being] from Wexford even though it’s a majorly hurling county and with the game in Croke Park there was a buzz around the place even from non-traditional rugby supporters [with regard to], the occasion and what it was.

“I remember that try in the corner from the crossfield kick; remember John Hayes crying at the anthems, stuff like that sticks in your head.”

Those occasions will have precisely zero bearing on the outcome at the Aviva Stadium on Saturday. What will have a bearing is Ireland’s ability to conjure up a performance commensurate in quality with those from the November portfolio.

Furlong outlines the extent of the challenge in his synopsis of Saturday’s opposition. “England are winning the tight games. They have big ball-carriers, play fast, attack the gain-line well, very clinical when they get into the opposition 22 and their kicker, Owen Farrell, is right with there with the best in the world. If you give him a shot anywhere in your half he’s probably going to punish you.”

All of which is true but the key if Ireland really believe they are capable of beating any side in the world on a given day, is what they produce on a Saturday evening in Dublin.