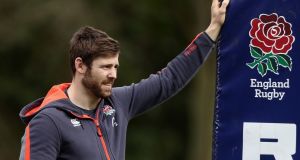 Elliot Daly is in contention to start for England in Dublin. Photograph: David Rogers/Getty

Elliot Daly remains in contention for the final hurdle of England’s Grand Slam defence after being retained in a 25-man squad for Saturday’s clash with Ireland.

Daly was the victim of a tip tackle by hooker Fraser Brown in the 61-21 victory over Scotland at Twickenham and has so far passed the return to play protocols for concussion.

The Wasps wing has two more stages to negotiate — Thursday’s full contact practice is the final element — and England hope he will be given the all clear for the climax to the 2017 Six Nations in Dublin.

The champions, who retained their crown against Scotland, are likely to name an unchanged matchday 23 if Daly proves his fitness.

The biggest selection call facing Eddie Jones is at number eight where Billy Vunipola could be recalled in place of Nathan Hughes.

Vunipola made a successful international comeback against Scotland after three months out with a knee injury, crossing for a try as a second-half replacement, but it was also Hughes’ strongest performance of the Six Nations.

Wasps hooker Tommy Taylor has been retained with the squad and is destined to perform travelling reserve duties alongside wing Jonny May.