Tommy Bowe to miss rest of season with fractured ankle 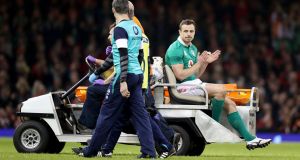 Tommy Bowe will miss the rest of the season after fracturing his ankle in Ireland’s defeat to Wales. Photograph: Dan Sheridan/Inpho

Ulster have confirmed Tommy Bowe will be out for the rest of the season after fracturing his left ankle in Ireland’s Six Nations defeat to Wales.

Veteran winger Bowe came on in the second half in Cardiff but was soon helped off the pitch as his side’s Six Nations title hopes were ended in brutal fashion.

Bowe underwent surgery on Tuesday and is expected to be out for between eight and 12 weeks.

Meanwhile Andrew Trimble will also miss the rest of the Six Nations and is set for four weeks out following surgery on a fractured hand.

There was further bad news for Ulster after it was confirmed Springbok backrow Marcell Coetzee suffered “a significant left knee injury” in the province’s 68-21 win over Zebre last Saturday.

He will undergo exploratory surgery next week to ascertain the full extent of the damage.