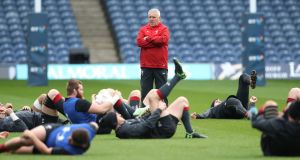 Warren Gatland: has not lost to Scotland with Wales and in his two Lions squads in 2013 and 2017 largely ignored players north of the England/Scotland border. Photograph: Ian MacNicol/Getty Images

Aneurin Bevan, the founder of Britain’s National Health Service, said that politics at Westminster were nothing compared to those in Welsh rugby.

Even at the height of the Brexit brouhaha, this week’s events have validated his belief. As Wales were preparing to face Scotland at Murrayfield in what they hope is the fourth leg of a Grand Slam, administrators were falling out in the most public fashion.

The question for a Scotland team, whose problems lie on the field rather than off it after muted performances against Ireland and France, is whether the uncertainty over their futures has unsettled the Wales players or injected a team on a record run of 12 consecutive victories and chasing a fourth title in 12 years with even more resolution.

“All the goings-on off the field might add fuel to the fire,” said the Wales wing Josh Adams, whose late try sealed victory against England in the last round.

Under their head coach, Warren Gatland, the players have been adept at compartmentalising and blocking out external noise, making them as mentally strong as the successful side of the 1970s. The future has been put on hold for a couple of weeks.

“For us, it’s not a case of carry on regardless, but one of being sympathetic to the situation, aware that this is not just about the guys in the national squad,” said the Wales captain, Alun Wyn Jones, after training at Murrayfield yesterday afternoon. “We want a few more answers after the Six Nations, but we’ve got a job to be getting on with.”

Wales are top of the table because they have added up to more than the sum of their parts. While Ireland were unable to chase England who in turn were unable to wrestle back the initiative in Cardiff as their interval led was eroded and then overhauled, Wales came back from 16 points down at half-time against France and defeated England in the second half in Cardiff 18-3.

Their conditioning is such they fatigue less than other sides in the final 20 minutes, allowing them to overcome a slow start. Two years ago at Murrayfield, when Gatland was on sabbatical with the Lions, Wales blew an interval lead in an uncharacteristic collapse.

“The boys who were involved that day are hurting and want revenge,” said the flanker Josh Navidi. Their number includes the hooker Ken Owens who believes the anger generated by what has been going on in boardrooms will “not split us but bring us closer together. We are looking forward to getting rid of some of our frustration”.

Scotland are looking to avenge two defeats in Cardiff in the past 13 months, in last year’s Six Nations and again last November when the sides played for, as they will this weekend, the Doddie Weir Cup. Gatland has not lost to Scotland with Wales and in his two Lions squads in 2013 and 2017 largely ignored players north of the border.

He did so partly on the basis of Scotland’s poor away record and that of their two professional sides, Glasgow and Edinburgh, but before last month’s defeat to Ireland, Scotland had beaten all the other countries in the championship at Murrayfield in the previous two years. Injuries have undermined them this year, but Finn Russell is back at fly-half and WP Nel fortifies the front row.

While Wales are not exceptional in any one area but have no glaring weakness, Scotland thrive in loose play. Wales were, for them, cavalier in the first half in Paris, running from their own half in the rain and making mistakes.

“Scotland are the most innovative of teams and we do not want to overplay,” said Jones.

Scotland have had two weeks to reflect on the defeat in Paris, a game they went into believing they could secure their first away Six Nations victory outside Rome since 2010.

“It was a really low feeling,” said the secondrow Jonny Gray. “We did not show up on the day. We have had meetings individually and together and we have been brutally honest. It was not nice to take, but you have to if you want to make your country proud.”

A Wales victory would take the title race to the final weekend but a defeat, or draw, would leave England in charge of their own destiny again.

“What has happened this week has been galvanising,” said Jones. “You have distractions whatever career you are in. We are not politicians and focus on the rugby; it is the easy bit.”