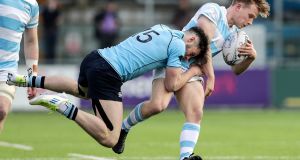 St Michael’s eclipsed rivals Blackrock for the first time in the Leinster Senior Cup when making their way to the semi-final with something to spare.

Blackrock were quickly on the front foot, playing keep ball in the opening exchanges but made their runners targets for St Michael’s fired-up defence and all too often they were driven back in double tackles. St Michael’s weathered the storm of big carriers, like Sean O’Brien and Ed Brennan, coming out the other end of it unscathed.

When they did manage a position of their own for the first time they were unable to gather their lineout as the pressure told. They were back again shortly afterwards, though, this time hooker Lee Barron finding Stephen Woods for a driving maul, forcing a penalty which Chris Cosgrave struck over in the 10th minute.

St Michael’s second row Woods made the next telling impact as he stepped in for an interception, allowing Cosgrave to make an outside break as the temperature of the game soared. The St Michael’s scrum then squeezed one against-the-head and after a series of drives their lock John Fish touched down at the base of the posts for Cosgrave to convert in the 19th minute.

It was a big moment that Blackrock had to respond to, and in a game of inches their scrum-half Matthew Cullen was given a huge hole at the side of a scrum and ate up the ground. This was met with fierce defence which caused a turnover.

St Michael’s outhalf Niall Carroll then poked a grubber through, Blackrock fullback Chris Rolland picking it clean before setting off. Niall Comerford took the attack up a gear before Andrew Smith brought him down.

St Michael’s hit back when Jack Guinane broke away with the ball to trigger another fine attack which Cosgrave turned into three points in the 32nd minute.

From the restart, ‘Rock wing Ben White made contact with Mark Hernan in the air for a yellow card just before the whistle sounded for half-time.

The stop-start nature early in the second half suited St Michael’s until Comerford’s charge down gave Blackrock the impetus and brought his side to within five metres. Number eight Brennan burst off the back of a scrum and two phases later ‘Rock were piling to the line only for the ball to be held up.

Blackrock kept at it, with Brennan to the fore, until Guinane forced a knock-on from Cullen. Blackrock needed something, anything. The finally got on the scoreboard when Mark Hernan was penalised for his late arrival into a ruck and David Fitzgibbon nailed the penalty in the 54th minute.

It could have been the start of something. Instead, Guinane got his hand in at a ruck for a penalty to St Michael’s, but Cosgrave’s shot came back off an upright.

It wasn’t long before Cosgrave was back for another go and there was no reprieve for ‘Rock this time as he made it 16-3 in the 62nd minute.

Replacement Scott Barron did make it over for a consolation Blackrock try which Tom Gavigan converted, but St Michael’s were never going to be caught at that late stage.