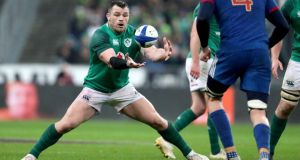 Cian Healy:“Up front we know if we do our job right, the lads on the sides are going to get scores because we are chipping away breaking people down.” Photograph: Dan Sheridan/Inpho

“Getting front foot,” says Cian Healy. “Reinforce what we stand for.” There’s a brevity about the Irish prop that cuts to the chase, his voice echoing around the drawing room at the Irish base. They are two things that can beat France alright. What about tries?

A cruel question to ask a loosehead, maybe. How to build try scoring into a win. Touch downs against France and the frontrow set of priorities don’t always cross paths during a match. But Healy disagrees. He comes back with the forward’s observation that before you can begin to create a masterpiece you first have to blast the rock from the quarry.

“You have to break them down before you start scoring tries,” he points out. That’s his domain alright. However, in the last four Six Nations matches against France, Ireland have scored a singular try. All of the other points have come from the boots of Johnny Sexton and the banished Ian Madigan.

It may be ornery to point out Ireland’s scoring rate when, in the last five games against France, four of them in the Six Nations and one in the Millennium Stadium in the 2015 Rugby World Cup, Ireland have won four.

It’s all about ourselves. It’s about winning the game no matter how you do it

In the process of winning or losing it is immaterial how it arrives, by kicks or tries. But is there a particular issue against the French defence?

Last year, on the sloppy turf in the Parisian Banlieue of St Denis, Johnny Sexton drop kicked a heavy ball in slanting rain, the equivalent of a nine dart finish or a hole in one. An Irish win. Four penalties and a drop goal from the Irish outhalf. No tries.

The year before, a Conor Murray try and 11 points from Sexton delivered another 19-9 Ireland win, again in a defence-dominated encounter driven by Murray and Sexton. CJ Stander and Jamie Heaslip weighed in with 40 carries and 28 tackles between them in Ireland’s biggest winning margin against France in the Six Nations since 1975.

In 2016, Maxime Medard’s late try snatched victory for France over a battered and bruised Ireland in an attritional contest again in a wet Paris, Ireland’s three points coming from Sexton’s tee.

“It’s all about ourselves. It’s about winning the game no matter how you do it,” says Keith Earls. The Irish winger says this week in camp there has been no specific talk of Ireland’s try scoring record against France in recent years. The overriding sense is that tries will come if players perform.

“It’s just a feel for an individual. You go looking for the ball a bit. There are things you can do at training like practice one-on-ones and stuff, which we as wingers get. We have our team set plays as well, that hopefully get some of our faster players or more intelligent players into space at the right time. We try and look to see if there is weakness in the team and come up with a move for it.”

In 2015 it was business as usual with Ireland beating France in Dublin. Man-of-the-match Sexton, who had been out for three months with concussion, kicked four first-half penalties and another with Ian Madigan also adding to the tally of 18 Irish points.

There are mitigating factors and in 2018, 2017 and 2016 the matches were played in wet conditions with a soapy ball. Sunday is expected to be cloudy in Dublin with some rain. Still Teddy Thomas touched down for France last year, Medard in 2016 and Romain Taofifenua in 2015.

“We don’t worry about how many tries we are going to score,” says Healy. “If we go out thinking we need to get X number of tries they are going to score them against us. Up front we know if we do our job right, the lads on the sides are going to get scores because we are chipping away breaking people down.”

France have been playing the game they play for too long for anyone to be surprised about how fullback Thomas Ramos conducted his side’s first try against Scotland. Chasing back for a nicely weighted kicked ball Scotland believed they had pressed the 23-year-old into his right corner deep inside the 22.

Instead of panic, Ramos turned and gave license to himself to spark a counter attack. His balance, self-possession – combined with an untouchable poise – and an absence of fear sent him on a freewheeling run, first side-stepping Scottish outhalf Pete Horne – who was in for injured Finn Russell – before carving through a field of blue Scottish forwards.

Delivering to the right wing, Ramos stayed in support as Damian Penaud consumed ground up the right and when the ball went to ground five metres out from the Scotland line, it was the fullback first to the breakdown who picked and passed left to Romain Ntamack.

The first French score of the match was an 80 metre counter attack from a Scotland move designed to fence them in.

“Yeah, I think it was the case that Italy were very good in broken field [play, Scotland with the likes of Hogg and Maitland and Kinghorn who came on – good broken field runners,” says Simon Easterby, Irish forwards coach.

The French ability to turn nothing into something, their instinct to see space and opt for an unstructured response instead of falling into a commonly understood set pattern puts teams onto a wary footing

“The French clearly love that type of game and we don’t want to be offering them up opportunities to counter like Ramos did against Scotland and get those opportunities to score. That’s something we’re continually looking for, to pressure teams and not give them those access points. When it’s in a broken field situation, whether it be a turnover or a kick that hasn’t quite gone to plan, then we clearly need to get back on point and make sure that we don’t give them those opportunities.

“Across the board, they are pretty lethal with Penaud and Huget and Ramos at the back and then you have players like Basteraud and Fickou who can do some damage in the middle. We’re pretty focused on trying to limit the opportunities that the French get from those broken field situations.”

While Easterby recognises the menace of a particularly French attitude and is confident Ireland have the ability to counter it, maybe circumspection against the multiple threats has cast a cautionary spell over the Irish attack.

The French ability to turn nothing into something, their instinct to see space and opt for an unstructured response instead of falling into a commonly understood set pattern puts teams onto a wary footing. If that instils hesitation, then their attacking potential is in itself a good defensive ploy.

French coach Jacques Brunel expressed a view on Tuesday, when he selected the same team that beat Scotland, that he expects a kicking game from Ireland. He expects Sexton to find territory and space. He expects Murray to box kick and for Ireland to play their pressure game. He said it with a palpable lack of concern, sexagenarian sangfroid from the 65-year-old coach.

“Last year particularly they were very strong defensively,” says Easterby of France. “I think they had one of the better defensive records throughout the championship. I think we are continuing looking at those moments be it the set piece, kick return or turnover ball.

“We’ve scored some of our best tries over the years from forcing errors on the opposition. So we are continually looking for access points. But it’s certainly not something we are getting concerned about in the build up to this game. We’re trying to focus on what we can do really well, not look back at what we have done in the past.”

Murray aside, the last Irish try against France came from fullback Rob Kearney in the Millennium Stadium in the 2015 World Cup. Front foot, as Healy might say, and in another World Cup year, who knows.