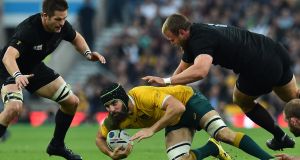 A potential Welsh Grand Slam with Ireland a possible wrecking ball on the final day has shades of England in 2017. Warren Gatland isn’t the only coach to muse over how hard it is to actually win one. But Gatland, along with Joe Schmidt and the others, understands that a Grand Slam in the year of a World Cup doesn’t mean a bull market in the spring equals a bull market in the autumn.

Ireland and a “worried” Schmidt can draw some consolation; the trend has been whatever takes place between the end of the Six Nations and the Rugby Championship and the beginning of the World Cup is the determining factor in who will win it.

The Rugby Championship will this year be a four-round tournament, shorter than normal due to the World Cup in September. It is also been brought forward to late July.

England are the anomaly. Grand Slam winners in 2003, Clive Woodward took his team to Australia later that year and won the World Cup. They are the only team to do the domestic and the global north or south of the equator in the same year.

The Tri Nations, which ran from 1996 to 2011 before Argentina joined and was rebranded the Rugby Championship, has never had a winner go on and win the World Cup in the same year. In 1999 New Zealand won the Tri-Nations, Australia the Rugby World Cup. In 2003 New Zealand were again strongest of the three but Jonny Wilkinson kicked England to RWC victory in the 100th minute. In 2007 the All Blacks took the domestic trophy but South Africa won at world level.

In 2011 Australia won the last Tri-Nations but New Zealand finally added to their 1987 World Cup win. The All Blacks did it again in 2015 for two World Cup wins in a row but that year lost out to Australia in the 0Rugby Championship.

“It is hard to do,” says Scott Fardy, the Leinster lock and flanker, who was capped 39 times for Australia. “There are so many things that happen in the Rugby World Cup, so many things that go in that seven-week tournament. Things can go completely wrong for teams. You saw that with Ireland [in 2015] with injuries.”

“Things went really right for us [Australia] at certain times of the tournament. Scotland, we got the right or wrong decision there [a last minute penalty]. We had a tough pool. We had England and Wales. We had to fight our way out of that, fight our way through two tough teams to get to the final. I wouldn’t be overly worried about things happening before it. You’ve got seven games to win the thing. Sometimes you have small dips but I don’t [see an Irish crisis].”

In modern times, Ireland have won the Grand Slam twice, in 2009 and 2018, which were not World Cup years. The team was also Six Nations champions in 2014 and in the World Cup year of 2015. But that success was no barometer of what would happen later, which was elimination by Argentina 43-20 in the quarter-finals. Groundhog day again.

“You do have a Six Nations to play and you still have a lot of important rugby to play from here to the World Cup,” says Felipe Contepomi, whose career with Argentina spanned four World Cups.

Once they go into those 2 ½ months before a World Cup, they switch mode to Ireland and the World Cup. I’d say they will be okay

“You don’t want to peak too early and you want to peak on the [World Cup] month-and-a-half. You have to plan and you have to look and see how it is working. The crucial moments will be those two to three months before the World Cup when they get together, when they have time to work on combinations.

“Once they go into those 2 ½ months before a World Cup, they switch mode to Ireland and the World Cup. I’d say they will be okay. You have to arrive to that stage with a lot of options with everyone fit as possible and, hopefully, with silverware which can give confidence.”

An average performance in the Six Nations for a place beyond the quarter-finals in September is a deal no one can make, even Schmidt. Ireland’s dip in performance maybe disconcerting and not easily explained. But nor is bear market form indication of a probable crash.

“I don’t think they have come out and said they have played their best yet, have they?” says Fardy, a former backrow partner of David Pocock and Michael Hooper. “They are aware of what they need to do. I’m not Irish, I have never been in Irish camp. I know there are some creative guys in the room there and really good players.