Head-to-heads: How Ireland and France stack up at halfback 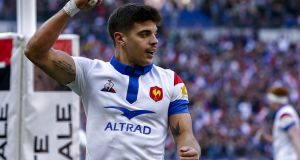 Romain Ntamack is a wonderfully balanced runner who has a knack for breaking forward as befits a player used to the centre. Photograph: Catherine Steenkeste/Getty Images

Age: Unless Joe Schmidt makes an uncharacteristic change in either position, Ireland will choose ability and experience. Murray will be 30-years-old in a matter of weeks while Sexton is 33. Sexton is World Player of the Year, Murray is established as one of the best scrumhalves in the world. Their experience is backed up with caps, Sexton on 81 caps and Murray with 70. Experience should overwhelmingly favour Ireland in this meeting.

Style: Murray has traditionally box-kicked a lot and on form has made them better than a 50/50 high ball. So far he’s kicked 36 times, with only Ben Youngs and Owen Farrell kicking more metres. This season he has also taken place kicks and after three matches is 100 per cent with three form three, Sexton five from seven. Both players bring a physical side to their game and Sexton’s territorial kicking and ability to shape the match is superior to most, again when he’s on form. Neither player minds physical contact, which will be important with Dupont sniping. Murray can do that too and has two tries to boot.

Form: It has been the pressing issue with the halfbacks and the Irish team in general. Murray is not as sharp and game-shaping as he can be and Sexton has been making uncharacteristic errors. Frustrated, the two now face a French pairing they have never played against before and whose confidence is high having displaced recognised international players Lopez and Parra. It is fair to say the French players’ form lines are excellent and they will have gained more from beating Scotland than Ireland did for winning against Italy.

Match Influences: Both Irish players are masters of running the Irish game and setting the tempo. In that aspect of game management they should excel against the two French rookies. Murray needs his box-kicking to click and to find under high balls. Sexton usually brings a sense of certainty and structure to Ireland against which the other players gain leverage and take confidence. His is a critical influence. That hasn’t been so apparent in the opening three games.

Age: France have opted for flair and ability over experience. Dupont is 22-years-old with 12 caps to his name while Ntamack is 19-years-old and has made just three appearances. Dupont has been in the international crosshairs for the last 12 months or so with Ntamack beginning his international career to much fanfare this year, 25 years after his father, Emile, first played. Dupont is already, prematurely, being touted as potentially one of the great French scrumhalves. Both players, with a combined age of 41, are absolutely green behind the ears at this level.

Style: Although England dominated France 44-8, Dupont managed the most line breaks of any player across the weekend with three, topped the offload charts with four, and racked up 90.7 metres with ball in hand. He’s not afraid to have a go. Ntamack is a wonderfully balanced runner who has a knack for breaking forward as befits a player used to the centre, and the outhalf scored against Scotland in support after a Thomas Ramos break. Dupont is behind Conor Murray in kicking, and fourth overall to England’s Ben Youngs and Owen Farrell with 557 metres to Murray’s 810 metres. Dupont has had four linebreaks so far to Murray’s one.

Form: This is where the main differences currently lie. Dupont and Ntamack come in as fresh-faced changes to established French players like 30-year-old Morgan Parra and 29-year-old outhalf Camille Lopez. The two younger halfbacks are in on form alone, with Jacques Brunel showing strong faith. With others, like the 20-year-old prop Demba Bamba and 23-year-old fullback Ramos, already proving themselves under Brunel, the French fetish is to play the player if he is good enough regardless of age. Both Dupont and Ntamack start exactly because of that.

Match Influence: Dupont’s numbers, on clean breaks, offloads, and ability to beat players, are up there with the best. He will attempt line breaks against Ireland. He will race up the field. He will break tackles. His challenge is to run his game smarter. Ntamack has effortlessly stepped up to international level, a tell-tale sign of all-round self-possession. Running a game will also be the challenge. He’s a smart player and has good peripheral vision and, not unlike his father, an athletic frame.