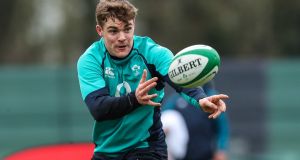 Garry Ringrose returns to the Ireland midfield to play France on Sunday after missing the games in Edinburgh and Rome through injury. Photograph: Billy Stickland/Inpho

Kearney didn’t enjoy his most fluent afternoon in Rome, playing a part in both of Italy’s tries and not having much impact offensively. However, he remains integral, and his defensive nous will be key against the French.

Earls has been one of Ireland’s standout players in their last two games and seems to be getting better with age. He scored against Italy and was an assured presence in midfield after an injury reshuffle.

A welcome return for Ringrose, whose creativity with the ball in hand could be the catalyst to reignite Ireland’s dwindling attacking flame. His defensive brain will be key as well.

Ireland’s midfield linchpin was forced off with a head injury after 11 minutes in Rome and never returned. But Bundee is back – expect the usual defensive stability and fearsome carrying.

If Ireland have seem laboured in this year’s tournament, Stockdale has remained as sharp as ever. His try in Rome typified his attributes – a great opportunistic read followed by an unstoppable finish.

The master is fit to start on Sunday and show the French apprentices how it is done. Control will be key against mercurial visitors and Sexton can dictate the tempo with his boot.

Murray still seems to be trying to play his way back into form, but is yet to really move through the gears. Ireland could do with his kicking radar returning to its usual best.

Healy was stood down against Italy so will be refreshed for the French. Their 20-year-old tighthead Demba Bamba is a thrilling prospect but Healy can show him the dark arts of the frontrow on Sunday.

Another who was given the Italy game off, Best’s value to the side was emphasised as the Irish lineout struggled in the Stadio Olimpico.

Amid the soul searching and hand-wringing of the last few weeks Furlong has remained consistently excellent. Ireland might have a few problems but while he is fit Furlong will never be one of them.

Joe Schmidt made the brave decision to leave Ryan out against Italy on account of a niggle and now Ireland’s super-human lock returns to take on the French. He will be raring to go after a rare week off.

Ireland’s power game has been lacking in the Championship thus far so Henderson’s return to the starting XV is welcomed, with the Ulster lock bringing serious class and ballast into the engine room.

The most dependable man in world rugby? O’Mahony has bounced back from the English setback with two huge performances against Scotland and Italy – another awaits against Les Bleus.

Returns to start at openside after coming off the bench in both Edinburgh and Rome as a replacement for Seán O’Brien. Started opening defeat to England, making 17 tackles but suffered like most of the pack that day as the visitors did a number on them.

Stander is back in the saddle after a rare lay-off, enforced by a broken facial bone in the defeat to England. His carrying and tackling have certainly been missed.