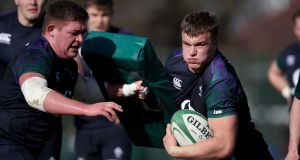 Kick off: 3pm, Sunday. Venue: Aviva Stadium. How to follow: The Irish Times liveblog will begin at 2pm. On TV: Virgin Media One and UTV.

Joe Schmidt has named a strong team to face France on Sunday at the Aviva Stadium but the absence of Seán O’Brien and Tadhg Beirne from the match day squad required further explanation from the Ireland coach.

“As tempted as we were with Tadhg Beirne he’s been a little sore this week, still coming back from injury. Ultan Dillane has played really well for us. His tackle count [20] was high against Italy and the number of positive involvements were really good as well. We wanted to reward that performance.

“Tadhg will get the weekend off. He will come back in fresh to train next week and we will make some decisions.

“With Seán O’Brien, Jack Conan was due to start against Italy [but was injured] so we want to give Jack that chance. Josh van der Flier has had less time than Seán and hasn’t let us down at all. It’s a perfect opportunity to put him back in and he is very keen to get him back in there.”

As previously reported, Seán Cronin, Jack McGrath and O’Brien were sent back to Leinster last week rather than train with the Ireland squad in Belfast. None of them were recalled with Munster duo Niall Scannell and Dave Kilcoyne covering hooker and loosehead prop respectively. John Ryan has dislodged Andrew Porter as the tighthead replacement.

Jordan Larmour regains number 23 with Munster’s Andrew Conway one of seven players who featured in the disappointing 26-16 win over Italy in Rome to be dropped.

“We wanted to spread the load in this Six Nations which was different from the past,” Schmidt explained. “We now have an opportunity this Sunday to stay in the mix and we are desperately keen to do that.

There were guys who would have been disappointed with their performance against Italy.”

Regarding any crisis of confidence in the Ireland camp, following three disappointing performances in this year’s Six Nations, Schmidt stated: “We always want to be really well prepared mentally. We use a little support externally and we have a pretty thorough way of trying to make sure everyone is on the same page and that we are confidant and have belief in each other.

“You got to have trust on a rugby pitch. Players have to do their own job.

“I know there are a lot of people saying ‘what can we change’ but a lot of what we did last year is still just as relevant if we want to win games as it will be in 48 hours time. We just have to be more accurate.”

1 Ken Early: Frank Lampard’s problems start at number one
2 Man United in talks with Dortmund over €100m deal for Sancho
3 James Ryan set for up to 12 weeks on the sidelines
4 All in the Game: Klopp gets the last laugh in quiz show
5 Rory McIlroy admits missing the crowds as he looks to end Major drought
Real news has value SUBSCRIBE