Murray and Sexton crucial if Ireland are to spoil Welsh party 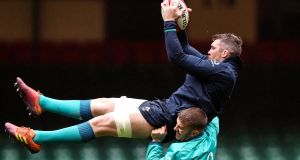 And so it has come down to this, Cardiff braced for an invasion from the valleys and all corners of Wales for a 12th Grand Slam, another mother of all parties in the capital, and no amount of rain will dampen their fervour. The joint will be rocking. It may be wet, but it will be feverish.

Akin to the barman who calls closing time, and best of luck with that one, true to their role of party poopers, Ireland’s decision to have the roof open despite foreboding warnings of Storm Hannah (which, ironically, has replaced Storm Gareth) has angered Wales and ensured more spectators will be sodden.

But it will have pleased traditionalists who regard rugby as a winter game while also ensuring it will be even more of a tempestuous, get-down-and-dirty, arm-wrestle than it was already going to be.

“We made a decision on playing a game of rugby in the outdoors,” said Best after his final Guinness Six Nations captain’s run.

“A lot has been made of it outside our camp. It was the best decision we made and we just left it at that so we can focus on preparing for a match, whether it is indoors or outdoors. We were just out there now and because it is such a big stadium the wind swirls a bit. It will be what it will be, I suppose.”

In a campaign of ‘if onlys’, Ireland are left to rue that intercept try which afforded England a bonus point on the first Saturday, and ultimately denied them one, but for which this would be more of a title shoot-out.

That Wales have more to play for, and that their giant bear pit will be rocking, will assuredly inspire their best performance so far. Somehow matching those levels of desire, with what will need to be their best display to date, makes it a particularly relevant test for Ireland in a World Cup year.

“We’re not really as concerned about who people perceive wants to or needs to win more,” maintained Best.

Wales are on a record winning run of 13, and Ireland – lest we forget – have actually won 23 of their last 25 matches.

Ireland look to have the better pack and potentially the better forwards, but then we probably thought the same two and four ago. And the nagging suspicion remains that the whole will again add up to more than the sum of Wales’ individual parts.

They may not have particularly scaled the heights, but in their previous outing here their mental strength, composure and a game plan revolving around pressuring the English halves, pick-and-go drives and aerial ability, supplemented by the arrival of Dan Biggar, eventually wore down England.

“It will be the same approach we had with England,” forewarned Gatland. “We put Ben Youngs and Owen Farrell under pressure and Conor [Murray] and Johnny [Sexton] are key. When we’ve had success against Ireland in the past we’ve tried to put pressure on Conor and Johnny and shut their space down. There is no doubt that when Johnny gets front foot ball he controls the game exceptionally well.

“It’s very much part of the game – you look at opposition ‘10s’ and where their strengths are and you try to negate some of those strengths. Johnny is World Player of the Year and absolutely world class. We’ve got to try and not give him as much time on the ball and now allow him to dictate the game to us.

“We’ve got to put him under pressure, but in saying that Ireland have world-class players all over the place and they can keep the ball for long phases. They build on their momentum and our discipline has to be very good,” said Gatland, noting how Ireland’s lineout is their starting point, and how England were restricted to four throws.

With 89 points to date, Wales could win a Slam by scoring even less their 109 in 2012, hitherto the lowest by any Slam winners since Five became Six Nations. But they’ve the best defence (six tries and just 58 points conceded) which also has echoes of seven years ago, when they conceded just three tries, as did Ireland’s Grand Slammers of 2009.

One could again envisage the Welsh defence absorbing intense, multi-phase pressure, having restricted Ireland to a penalty try in their last two losing visits here. Ireland’s chances may hinge on the ability of Murray and Sexton to prise open that stubborn Welsh line once or twice.

They should match Wales physically and, with the likes of James Ryan (Ireland’s fourth different lineout caller so far), Tadhg Beirne (their sixth lock) and CJ Stander, back to his best last week, ditto for work-rate. The breakdown will be ferocious, and with Beirne and Sean O’Brien in the mix, Ireland are stacked with poachers.

Silencing this crowd might be a little fanciful but Ireland’s ball retention may take some of the sting out of the occasion and in the electric Keith Earls and Jacob Stockdale they can match the cutting edge of Josh Adams and George North.

Historically, this Celtic collision has been the most fiendishly difficult to forecast for decades, with home advantage often anything but. The bookies can scarcely split them, making Wales one-point favourites. The draw probably makes more appeal than any other match so far.

Eddie Jones may have been wide of the mark when mischievously, if unhelpfully, suggesting Wales are ‘tiring’, but it could be he was onto something suggesting Ireland were ‘peaking’.

Ireland then. Just. Maybe. But either way, come 2.45 it will be time to strap ourselves in.