The Offload: it’s time to stop the penalty try double-whammy 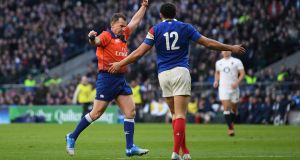 Cost of a penalty try too high

It’s a personal grumble but it is time for World Rugby to re-examine and possibly rethink the sport’s ultimate double whammy when referees award a penalty try and a yellow card for the same transgression; or at the very least curtail the instances when it is permissible as a twin sanction.

It happens regularly with the punishment more often than not ridiculously harsh. The latest example came on the opening weekend of the Super Rugby Championship in a match between the Blues and the defending champions, the Crusaders.

The latter were motoring nicely towards the Blues’ try line from a well-constructed lineout maul when Blues’ flanker Tom Robinson was adjudged to have illegally halted its progress a few metres short. Referee Nick Briant was absolutely correct to award a penalty try but then brandished a yellow card to Robinson.

He applied the letter of the law. But does the censure fit the crime? In the eyes of this column it’s too heavy handed. The penalty try, seven points as there is no need to take a conversion anymore, the extras are automatically added, was a fitting rebuke.

It’s designed to dissuade cynical play or a professional foul but when the outcome is the concession of seven points is there need to reduce the defending team to 14-players for 10-minutes as an add on penalty? If a player transgresses and there is no penalty try awarded then by all means give him/her 10-minutes in the sin bin.

If it’s a penalty try and there is no issue with serious foul play then let the seven points stand as the punishment. If the player is a repeat offender in identical circumstances then escalate the sanction. It’s time to stop the double punishment.

As if matters weren’t already at a low ebb on the pitch for the French Rugby Federation (FFR) and Bernard Laporte, they were compounded by the start of a tribunal hearing in Toulouse taken by former French coach Guy Noves (2015-2017), who is looking for €2.9 million compensation in back pay – his contract with the FFR was reported to be worth €800,000 per annum – and damage to his reputation.

Laporte and Noves enjoyed a pretty tetchy relationship down through the years but the manner in which he was removed as French coach amid allegations by the FFR of serious misconduct has angered Noves. A primary accusation was that he and his coaching team failed to liaise with the French Top 14 clubs when in charge of the national team, something that Noves rejects.

Noves who spent 22 years in charge of Toulouse (four times European champions, nine French Top 14 titles) became the first French national team coach to be sacked and is determined to clear his name. He said in a recent interview with French newspaper Le Monde: “For 14 months, I’ve been preparing for the fight of my life. They hurt me, and they’re going to have to explain themselves.”

“I’m no medical man but I would be surprised if Dan isn’t fine to train with Wales this week.” Northampton Saints coach Chris Boyd is looking to cheer up the whole of Wales with his prognosis about the knee strain that saw Dan Biggar limp off against the Sale Sharks at the weekend.

Ian Keatley had quite the eventful afternoon on his debut for London Irish against Coventry, scoring a try after just two minutes, which he converted, and then after 26-minutes being escorted from the pitch.

The match report on London Irish’s website stated of the incident: “Keatley was subject to a ferocious collision with Coventry fullback David Halaifonua. The Irishman went down hard but, thanks to the fantastic and quick work by the London Irish physios, managed to walk off the pitch to a standing ovation.”

The 31-year-old is currently on a short-term loan at London Irish before joining Benetton Rugby in the summer. He came through the Leinster academy, won a Six Nations Under-20 Grand Slam with an Eric Elwood coached Ireland team, and spent three years with Connacht before joining Munster in the 2010-2012 season.

He spent eight years at the province, making 180 appearances and scoring 1,247 points. Keatley won the last of his seven caps for Ireland against Fiji in 2017. Very popular with his teammates, there is much to admire in the way that Keatley was prepared to give himself every chance of being a professional rugby player, never once taking the softer option.

He also demonstrated a mental strength and resilience to complement his talent and there is little doubt that Benetton will benefit from their two Irish outhalves, Keatley and Ian McKinley; coincidentally both of whom had to leave Leinster to succeed.

0: Munster didn’t concede a single penalty in their Guinness Pro14 match against the Southern Kings which may/must be a record.