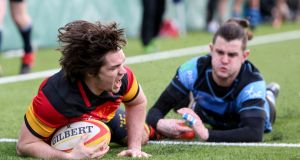 Dan McEvoy scores for Lansdowne during their win over Shannon. Photograph: Ben Whitley/Inpho

Fresh from last week’s Dalriada Cup success against Scotland, the All-Ireland League’s leading lights were back in their club colours on Saturday with Cork Constitution and Lansdowne continuing their respective marches towards home semi-finals in Division 1A.

Ireland Club XV captain Niall Kenneally was in try-scoring form as leaders Cork Con claimed a 34-24 bonus point win over Clontarf, one of their main title rivals. Third-placed ‘Tarf did well to bounce back from a 24-5 half-time deficit with Cian O’Donoghue, Peter Hoy and Sean O’Brien all touching down in the second half, but Con were too good with out-half Aidan Moynihan kicking 14 points.

Lansdowne, in second, have opened up a nine-point lead over ‘Tarf after a five-try second half surge earned them a 43-15 bonus point triumph at home to Shannon. Ireland Sevens international Mark Roche’s younger brother Tom bagged a brace of tries, with winger Daniel McEvoy, another returning Ireland Club international, staying top of the division’s scoring charts with his eighth try.

Dublin University remain hot on the heels of the top four thanks to a thrilling 31-29 bonus point victory over UCC, the student sides sharing out eight tries with out-half James Fennelly converting the hosts’ fourth try from Ireland Under-20 squad member Giuseppe Coyne and landing a 40-metre penalty. A last-gasp penalty attempt from UCC’s James Taylor fell short.

Munster winger Alex Wootton’s 78th-minute score was the last of eight second half tries at Dooradoyle where fourth-placed Garryowen prevailed 32-31 over bottom side Terenure College, while Derry man Conall Doherty scored a try and kicked 13 points as UCD edged out Young Munster 33-31 for their first win in four league matches.

Meanwhile, Malone have opened up a three-point lead at the top of Division 1B after defeating Ulster rivals Banbridge 22-15. Prop Peter Cooper returned from injury with a key 74th-minute try, adding to Rory Campbell’s 12-point kicking haul. Old Wesley’s 19-17 comeback victory at Ballynahinch has moved them from fourth to second place, full-back Rory Stynes crossing in the 76th minute to add to his three penalties.

The individual performance of the weekend saw Old Belvedere backs coach and captain Steve Crosbie tally up 25 points, including a hat-trick of tries, in their 52-7 hammering of Ballymena. ‘Belvo have swapped places with Buccaneers, who are back in the bottom two despite two tries from Connacht’s Eoghan Masterson in a 32-27 defeat at City of Armagh.