Chris Ashton ruled out of England’s crunch clash with Wales 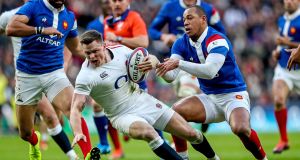 England wing Chris Ashton will miss out on Saturday’s Six Nations title clash with Wales because of a calf injury.

Ashton started the 44-8 victory over France and completed 51 minutes until he was replaced by Jack Nowell, who is now favourite to fill the vacancy for the Principality Stadium showdown.

The English Rugby Football Union revealed in a statement that the dual code international has a minor calf strain and will receive treatment at his club Sale Sharks.

He is expected to recover in time for the appointment with Italy in the penultimate round of the Six Nations.

It is understood that Ashton’s calf tightened up during training at the squad’s three-day camp in London, resulting in his omission from the 33-man squad named to step-up preparations for Wales.

Wing has become a position of strength for England and they will be able to absorb his loss without too much fuss, even allowing for the 31-year-old’s formidable strike rate of 20 tries in 44 Tests.

Nowell is likely to start on the right wing to reclaim the jersey he lost to Ashton for France’s visit to Twickenham — despite having excelled when starting against Ireland a week earlier.