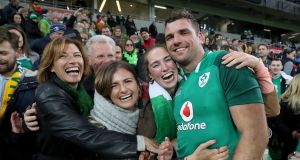 Tadhg Beirne celebrates with mother Brenda, father Gerry and sisters Jennifer, Alannah and Caoimhe after winning his first Ireland cap in the victory over Australia during the second Test at AAMI Park, Melbourne. Photograph: Dan Sheridan/Inpho

Like all debutants introduced to the highly detailed and demanding ways of the Irish squad under Joe Schmidt, Tadhg Beirne has had to undergo something of a crash course over the last three weeks.

Akin to Iain Henderson previously, in Beirne’s case this has been compounded by covering two positions, namely blindside flanker and second row.

And so it came to pass that when he came on for his Irish debut in the 64th minute, it was to replace Peter O’Mahony at number six, before Devin Toner’s departure meant Beirne moved to the second row, if only for a couple of minutes and without any set-pieces.

“It’s something I’ve been working on hard since the two weeks I’ve been in. They told me they see me in both positions so it’s been a lot of time on the computers, a lot of time talking to the likes of Dev, Pete, Quinn (Roux), all those boys, learning off them and them giving me a heads up.

“Even when I went out there I was having little chats with Dev on the way to lineouts just to double check I was getting my role right and stuff like that because it’s obviously pretty nerve-wracking going on for your first cap and you don’t want to get anything wrong, do you? So they definitely helped along the way.”

Sounding much like other debutants before him in recent times, Beirne confessed: “It’s been in some ways a bit of a shock, since I’ve been in camp, just the intensity of it and the level of detail and everything like that.

“You’re learning so much, day in and day out in that camp and that’s going through your head. Then you come on and the pace of the game is quicker. It’s just another step up and I thoroughly enjoyed it. I’m just hungry to get out there again now.”

Beirne first worked with Schmidt for a year while he was in the Leinster academy, but the level of detail with the step up to Test level was “just mind-blowing.” The crash course was more than worth it.

“I’m pretty chuffed, to be honest, getting a win and getting my first cap. It’s something special,” said the 26-year-old of a day made more memorable by his family being in attendance.

“Luckily they booked a couple of months back. My sister moved over last year to Sydney, so if I didn’t make the tour they’d get to visit her. If I did then obviously it’s a win-win for them. So they were over here and at the last game and they’ll be at the next one as well.”

Helpfully, the Munster-bound lock-cum-flanker was involved soon after coming on, although it looked for a second as if Bernard Foley might escape Beirne’s clutches on the outside before he scragged him to the ground.

“I think Foley almost handed me off at one stage and that certainly woke me up, I was like ‘Jesus!’ says Beirne, laughing.

“Luckily I managed to hold him otherwise I definitely wouldn’t be playing next week. No, look, once I got on the ideal thing is just to sit in and get in the defensive line and maybe get your hands on the ball early. Luckily I didn’t make any mistakes, I don’t think.”

Schmidt’s decision to bring Beirne on tour pending his return to Ireland with Munster next season is testimony to his outstanding form with the Scarlets over the last two seasons. This was also despite Beirne’s form and versatility meaning he played 2,286 minutes, give or take, for the Scarlets this season. Not that that statistic bothers Beirne.

“The body’s had a few bumps and bruises along the way but luckily I haven’t picked up any serious niggles and touch-wood it stays like that. Look, there’s one more game left to my season, potentially, if I get picked and then I have a break so the body can hang on for one more 80 minutes if I get that opportunity.”

Beirne was also quick to thank the Scarlets for helping his rise to Test rugby, after his phone was inundated with good luck messages from the Welsh club.

“I wouldn’t be here if it wasn’t for those boys. I’ve been very lucky the past two years to be surrounded by such good players, such good coaches and at such a good club. It’s a credit to Scarlets and I’ve got to thank them for this special day for me. I got messages from all of them, the players, coaches, physios, doctors, everyone. Yeah, I got a lot messages.”

While UCD had five players in the 23 for last Saturday’s second Test, Lansdowne were entitled to lay claims on three. In addition to Devin Toner, James Ryan played in the Lansdowne minis all the way up to Under-12s, and returned to the club where his father was once captain to play for their Under-20s and senior team in the Ulster Bank League.

As for Beirne, who hails from Eadestown in Kildare, in four seasons with the club after joining from Clongowes, he won an All-Ireland Under-20 medal and two senior UBL medals. That’s three Lansdowne-groomed locks in the same Irish match-day 23.

Moss Keane, a member of that 1979 series-winning team here, would have been looking down with pride.