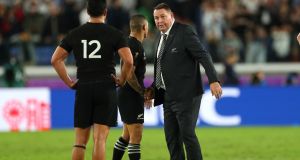 Not that he had much choice after such a convincing English win, but Steve Hansen was magnanimous in defeat, admitting New Zealand would have to take this defeat on the chin, while also vowing that it will fuel future All Blacks’ teams.

“Firstly I’d just like to congratulate England, they played a brilliant game of footy and deserved to win,” said Hansen, who whose final game of a stellar reign will be the third-fourth place playoff next Friday.

“You can’t give them half a step because they will take it. At the end of the day, you have to say well done to them.

“I’m really proud of our team, they’ve done a tremendous job for their country and tonight they weren’t good enough. We have to take that on the chin and so do the people back home. You saw the boys at the end, they were still trying their guts out and that’s all you can ask. Really proud of them.”

Outlining the reasons for England’s supremacy, Hansen began with the collisions and the gainline.

“One, they created the go-forward in the game. We struggled to dominate them at set-piece time or breakdown time, so when you’re going forward you get all the 50-50 decisions, and I’m not making an excuse. That’s just what happens in the game.

“The guys were giving their best and trying, they just got in a situation where England were better than us and dominated the parts of the game that we wanted to dominate. That’s why you’ve got to give them credit.”

Asked if this defeat was easier to absorb than the bitter quarter-final loss to France in 2007 – the All Blacks’ last defeat in a World Cup – Hansen said: “No loss is easy to take. Probably the only reason this is slightly better is that it’s in the semis rather than the quarter-finals. The boys are desperately hurting, as are the management. We put a lot of time and effort and energy in trying to win the thing. But as I’ve said if you don’t achieve what you wanted to do you have to put your big boy pants and stand up and be counted. It doesn’t stop you from hurting, it just means that you’ve got to accept what’s been chucked at you, and sometimes sport does that to you.

“They’re a good team, so there’s no shame in getting beaten by them. There’s a lot of hurt in it, and that hurt or adversity will feed a lot more All Black teams in the future. So we’ll find one positive out of it.”

Hansen wouldn’t quite so far as to admit the decision to start Scott Barrett and omit Sam Cane backfired, but his decision to reverse that decision at half-time certainly suggested as much.

“Well, look, if I turn around and say it backfired then Scott’s going to feel pretty average, so I’m not going to turn around and say it backfired. I’ll take it on the chin, that one. Scotty came out and played the best he did, but did we want to win some more line out ball? Yes we did, but we didn’t, but it takes more than one person to do that. If we had the time again, we might consider doing something different.”

Trailing 10-0 at the break, the All Blacks hadn’t come back to win after being held scoreless in the opening period since beating France in 1968.

“There were a lot of lineouts in today’s game and we probably didn’t get the platform there that we anticipated but again England were very good there. We had to try and shore that up and in the second half we did.”

This prompted one journalist to ask Kieran Read if his team had turned up with the right attitude.

“Yeah, I think we did. You’ve seen how hard we’ve worked out there. Definitely the boys really wanted it. I think that the detail of the match didn’t go our way but our work-rate and how much we really wanted it was there. You could see it even in that first-half when we conceded, we came back and hung in there. Tonight is pretty gutting. When it doesn’t go your way it’s a hard thing to take.”

At this point, Hansen interjected and took umbrage with the journalist.

“I’d just like to clear that up. I think it’s quite a disrespectful question, to suggest that the All Blacks turned up not being hungry. They’re desperate to try and win the game. Because I asked them at half-time to get hungrier doesn’t mean to say they didn’t up for the game.

“There’s a big difference and if you want to spend some time outside I’ll give you a rugby education on that one.

“But to turn up and say an All Blacks team comes to a semi-final of the Rugby World Cup with the amount of ability and the history that it’s had behind it, that’s not hunger. That’s a pretty average question I reckon.”