View from the Kiwi press: All Blacks ready to deliver beautiful retribution to Ireland 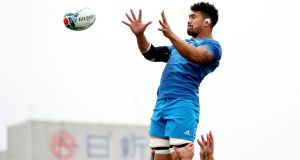 Here we go, then. On Saturday morning Ireland meet the All Blacks for the fifth and final time in the Joe Schmidt era, and this one is the biggest of them all.

It’s a Rugby World Cup quarter-final against the defending, back-to-back champions in Tokyo. It’s a chance for Ireland to go where they’ve never gone before and reach the tournament semi-finals.

It’s also an incredibly daunting assignment. Steve Hansen’s New Zealand are the best team in the world, and have a level of World Cup nous and experience which Ireland can’t match.

The All Blacks were clinical and slick in their statement performance of the pool stages, as they beat a resurgent Springboks side 23-13 in Yokohama.

In comparison Ireland have looked laboured for much of the tournament and indeed the year - confident wins over Scotland and Samoa bookended the pool stages, with a defeat to Japan and an agricultural win over Russia coming in between.

But despite this, Joe Schmidt’s side know the All Blacks are beatable - they have won two of their last three meetings with the world champions, the most recent coming in Dublin last November.

Not many teams beat the All Blacks in consecutive fixtures - something Ireland discovered in brutal fashion as they were beaten 21-9 in Dublin in November 2016, two weeks after their landmark 40-29 victory in Chicago.

And writing for the New Zealand Herald, Gregor Paul suggests New Zealand’s reaction on that tempestuous night was out of character.

“The All Blacks needed to respond and they needed to win. Ireland had out-muscled them in Chicago so the All Blacks, feeling the most intense pressure for the first time under Read, decided they needed to meet Ireland’s fire and fury with their own and 80 minutes of carnage ensued at Aviva Stadium.

“Under pressure, the All Blacks responded physically. Their tackling bordered on reckless at times. They pushed the boundaries at breakdowns and attempted to intimidate Ireland out of the contest.”

Last year’s 16-9 defeat at the Aviva Stadium will surely still rankle for the All Blacks - so how will they look to respond on Saturday, on the biggest stage of all?

Paul suggests they should trust their natural instincts. He writes: “That’s what Ireland fear the most – an All Blacks side that under pressure reverts to trait, but with the confidence to trust itself to be appropriately physical and disciplined.

“Their natural game should be able to put all the pressure back on Ireland and if it does, the All Blacks can be certain about what they will be facing.”

And in a seperate article, Paul writes that Ireland’s victory over the All Blacks last year could ultimately prove to be their downfall when the sides line out again at the Tokyo Stadium.

“Ireland’s blueprint is so basic that they could hardly lock up their intellectual property by slapping a patent on it.Others would see and others would copy and potentially those who replicated would reap the rewards.

“But what Ireland may perhaps not realise is that their victory did much more for the All Blacks than it did them.

“It instilled in the All Blacks a ferocious desire to rebuild their attack game and exact not so much a terrible revenge in Japan as one that would be inspired, creative and innovative.”

For Ireland, that win over the All Blacks last year saw their World Cup hopes reach fever pitch - they looked like legitimate contenders to lift the Webb Ellis Cup.

A quarter-final meeting with New Zealand, after finishing second in Pool A, wasn’t part of the masterplan.

But as Patrick McKendry writes - also in the NZ Herald - if Ireland aren’t going to break their quarter-final duck now, then when will they?

“They will bring their own form of pressure with their famous defensive wall, but can they handle the mental pressure after losing their previous six World Cup quarter-finals? They were ranked No 1 in the world recently so if they can’t progress at this tournament, when will they?”

For the Irish players, this is the biggest game of their lives - as Johnny Sexton admitted earlier in the week. But while there will be no shortage of pressure on the All Blacks, it’s nothing they haven’t dealt with before.

McKendry writes: “Make no mistake, this is where all eight teams still in the World Cup want to be, but coach Steve Hansen was right when he said during the months preceding this tournament that the pressure is always on the All Blacks to deliver.

“They’re the defending champions, but it’s just business as usual in terms of expectation. That’s a little different for Ireland and the messages coming out of their camp this week reflect that.”

Having beaten South Africa on the tournament’s opening weekend the All Blacks have only played twice since - with routs over Canada and Namibia - after their final pool clash with Italy was cancelled due to Storm Hagibis.

Will they be champing at the bit or will they be rusty? Writing for Stuff.co.NZ, Robert Van Royen suggests it could be the latter.

“The cold, hard truth is two weeks will have passed since the All Blacks played a match by the time referee Nigel Owens whistles open the quarter-final at Tokyo Stadium. . .

“The All Blacks held an intense inter-squad training session, which apparently matched a test match in some aspects. Fair enough. But you can’t go past match fitness, particularly when lock Brodie Retallick has just 30 minutes under his belt since busting a shoulder against South Africa in late July.”

However Michaela Blyde - the World Rugby Women’s Sevens Player of the Year in 2017 and 2018 - doesn’t think Retallick’s lack of game time will be an issue.

In the NZ Herald, she writes: “He will be a bit nervous himself without the momentum of much play behind him. But he is so mentally and physically strong he will always step up and do his job well.

“With this being such a big game, he will be fizzing. He will get the job done. You know that. The All Blacks had a great win over South Africa and scored a lot of points in their other pool games. Ireland will have a lot of trouble dealing with the All Blacks’ confidence.”

He writes: “Don’t believe the bulldust about these two teams being evenly matched. The reason the All Blacks were beaten last year is they were poorly selected and comprehensively outcoached, with a bit of fatigue thrown in as well.

“Selection-wise they look spot on for this fixture and tiredness clearly won’t be a factor, so if Steve Hansen and Ian Foster have come up with the right plans it’s going to be an All Blacks victory.”