How 1995 remains a key part of the Springbok spirit 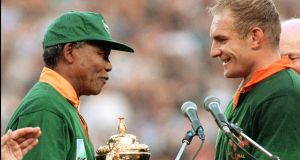 It will forever remain the single most iconic image in the history of Rugby World Cups and, perhaps, the game itself. Nelson Mandela handing over the William Webb Ellis trophy to Francois Pienaar while wearing a replica Springboks jersey, transcended sport in a way that no other rugby moment achieved.

Through the generosity of spirit and wisdom of one man, and the deeds of the Springboks, South Africa’s 1995 World Cup triumph on home soil helped to heal some of the country’s wounds and unite it to at least some degree.

Apartheid had been lifted in 1990-91, and South Africa were re-admitted to international rugby in 1992, before the country’s first free, multi-racial election in 1994 swept the ANC and Mandela to power.

One always felt that World Rugby and the rugby world took too much credit for bringing the World Cup to South Africa so soon after the apartheid era had ended.

The rugby world had retained contact with South African rugby while Mandela was in Robben Island and other prisons for 28 years while a host of racist atrocities were committed.

Among the official tours was one by a World XV in 1989 which was sanctioned by the then International Rugby Board, and there were also unofficial tours by the utterly inappropriately named “Rebels” or “Cavaliers”. There was nothing rebellious or cavalier about them.

Mandela and Pienaar became good friends, with Mandela among those at the ex-captain’s wedding and a godfather to his two sons. The 1995 triumph inspired a book and a film, Invictus, and much, much more in a nation where previously black people supported the Springboks’ opponents and despised the team’s emblem. After the 1994 elections, there was a very real threat of civil war.

The week after Mandela’s passing in 2013, Pienaar told the Observer: “During those six weeks what happened in this country was incredible. I’m still gobsmacked when I think back to the profound change that happened. We started obviously with a great leader with a fantastic vision who realised that sport is important for the Afrikaner white community and to earn their respect and trust.

“But on the other side I have such a respect for what he had to go through in the African National Congress because the springbok was a symbol of apartheid. The majority of South Africans never supported the Springboks, so to ask them to support them for the first time was a massive ask.

“Through the course of those six weeks, because he asked them and we came to the party in terms of playing good rugby and building a nice momentum towards the final, things happened in South Africa that were just magical.

“It’s well documented that Mr Mandela walked out into Ellis Park in front of a predominantly white crowd, very much an Afrikaner crowd, wearing a springbok on his heart and how they shouted, ‘Nelson, Nelson, Nelson!’ because what he’d promised he delivered. And when the final whistle blew this country changed for ever. It’s incomprehensible.”

Jon Cardinelli, the chief rugby reporter with SA Rugby Magazine, was 12 years old when Mandela handed over the trophy to Pienaar. Originally from Durban before moving to Cape Town, he watched Joel Stransky kick the winning drop goal at home with his family.

“My dad was a big rugby fan, my mum less so, but it was the kind of thing that brought everyone together. I remember my uncle saying he drove around afterwards and he saw kids doing drop goals in the garden. They were all trying to emulate Stransky. Everybody knew Nelson Mandela’s impact in that victory. It was a huge moment for the country, no matter who you were.”

The circumstances and timing of the 1995 triumph could never be replicated in 2007 when John Smit collected the trophy on behalf of the Springboks for a second time. Cardinelli had been a rugby journalist for 12 months, and was covering the tournament from South Africa.

“It was obviously a little bit different, not being in France, but it was still very important for the country. When we have a big win like that it does tend to lift everybody. You always feel that we need something to lift us and bring us together.

“Rugby-wise we had been through a lean patch as well. In 2004 we’d won the Tri Nations but in 2006 it was quite a tough time. That put us back on the map although apart from the 2009 Tri Nations we didn’t really follow it through. To win now would be huge because Rassie [Erasmus] has pointed them in the right direction.

“The fans desperately want it to happen, and it’s kind of like 1995 in that way. It brings people together, you can tell from following social media back home.”

In 1995, the late Chester Williams was the only pioneering black player in the team. In 2007, Bryan Habana and JP Pietersen were the wingers in the final, and the Boks’ World Cup squad also included Ricky Januarie, Akona Ndingane and Ashwin Williams.

Their 31-man squad at this World Cup contains 11 black players, including many frontliners and the Springboks first black captain Siya Kolisi.

“As well as giving people a lift there’s an aspirational pathway, things like that,” says Cardinelli. “World Cups always bring a bit more focus. Bryan Habana often speaks about how he was at the 1995 final (when aged 12) and how it inspired him, and in 2007 a lot of people would have been inspired by him.

“Siya Kolisi is the best example now. Everybody will tell you that if he can do it, anyone can. He comes from a township in Port Elizabeth. He didn’t have a great upbringing but he fought hard to make it happen.

“There is a few examples in the South African team like that. Makazole Mapimpi is another one. He doesn’t come from a lot and didn’t go through the normal channels to become a Springbok. He was playing for Border until about five years ago, just a very low level club player. I spoke to him earlier this year and he didn’t even think he’d be a Super Rugby player.

“Those kinds of stories inspire South Africans to push for a little bit more, and when you see them altogether, that’s kind of the story behind the story.”

The renowned South African rugby writer Gavin Rich, who works for supersport.com and is the author of Our Blood is Green, also points out that Kolisi is wearing the same number ‘6’ jersey as Pienaar did in 1995.

“I think there’s a lot of significance in that, and it is a much more multi-racial team than it was in the past, and on merit.”

Ten of the Springboks’ starting team which featured in the 38-3 defeat by Ireland almost exactly two years ago, including seven of the pack and 14 of the match-day squad, travelled to Japan. A dozen of the 23 that day will feature in Sunday’s semi-final.

Rich credits much of the Springboks’ transformation to Erasmus. “He’s actually really learned from Ireland. When he came back he told me that South African rugby wasn’t professional enough and he learned that in Ireland, he’d learnt from Joe Schmidt and he’d learnt from David Nucifora and from the systems and the structures there.

“I think that the most important thing for Rassie is that he’s very honest. He tells players exactly where they stand and what they need to do to get into the team. Make no mistake, Rassie is not a softie, but he’s personable too.”

Yet Rich also stressed these were tough times in South Africa with regard to their economy, political corruption and crime.

“If you think back to 1995 we’d just become a democratic country for the first time, so there was massive change then and a lot of uncertainty. The 1995 World Cup was about uniting the nation and bringing people together. You remember that ‘One Team One Country’ slogan, and I think we’ve sort of lost the plot subsequent to that both in terms of our rugby and the country as a whole.

“There’s a lot of negativity back home financially and political corruption and things that are happening. I don’t know if you know about load shedding. Our electricity provider [Eskom] isn’t really functioning properly, so for two hours a day they turn off the electricity, pinpointing certain areas around the country, which is ridiculous. That’s inspiring a lot of negativity.

“There’s a lot of civil protest at the moment, so South Africa is in a low space away from the rugby, and I think a Springbok win in the World Cup would certainly lift people. As Francois [Pienaar] said, people will stop thinking about those other things and they’ll think about the rugby, and that is still true even today.

“Historically that’s been the case more for white people, but I think it’s become a more multi-racial and culturally supported sport now.

“I’d love to know how many people in the townships support it, but there’s a weird anomaly though. If you drive past some of the poorer townships somehow they manage to get in decoders. So if you’ve got that you can watch, but remember rugby is not free-to-air back home.

“We can’t afford to finance our sport without the broadcast rights. I don’t suppose anybody can but South Africa in particular.”

Therein lies the Catch 22, and hence another major difference between the 1995 and 2007 World Cups is that, unlike those tournaments, this one is not being covered by the South African Broadcasting Corporation and so millions of South Africans will not be watching the Springboks.

The SABC sportscaster Thabiso Mosia said in September last year that they “could not reach an agreement with Multichoice/SuperSport who own both TV and radio rights for rugby”.

Sadly, then, although both the Springboks, and indeed their supporters, reflect their country’s multicultural society more than ever before, less people will see this semi-final, and this particularly applies to millions of young black South Africans.