Springboks' power game looks like too much for Wales to handle 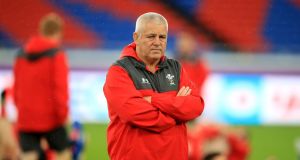 Kick-off: 9am Irish time, Sunday. Venue: International Stadium, Yokohama. How to follow: The Irish Times liveblog will begin at 8.30am. On TV: Live on RTÉ, Eir Sport and ITV.

Wales have almost slipped into the semi-finals under the radar and went into the weekend as the outsiders of the quartet to win the World Cup at 9/1. Yet they are the reigning Six Nations Grand Slam champions, and have won their last four matches against the Springboks. They must be doing something right.

What’s more Warren Gatland’s side have won 12 competitive matches in a row, dating back to their 37-27 defeat by Ireland in February 2018. They have won 20 of their 23 matches since that day, their three losses being in warm-up matches against England and Ireland (twice), making their presence here probably more of a sore point for Irish players and supporters.

Wales are also in their second semi-final (in addition to a quarter-final) under Gatland, and that is all the more amazing when you consider their squad are comprised mostly of players who made negligible impact for their regions last season – albeit there’s nothing terribly new there.

As their somewhat fortuitous 20-19 quarter-final win over France demonstrated, they have an uncanny habit of just finding a way. France created three fine tries and many other opportunities. Wales hardly created anything, yet fed off French ill-discipline, notably Sebastien Vaahaamahina, who was suspended for six weeks for elbowing Aaron Wainwright in the jaw.

Wales took their kicks and scored two tries off turnovers, yet you always suspected they would squeeze through from the moment George North made his try-saving tackle on Gael Fickou and Romain Ntamack hit the post with the ensuing penalty with the last kick of the first half, one of two French kicks to rebound from an upright.

Save for their performance against Australia in a belter of a game, Wales have not been especially inspired throughout, managing perfunctory wins over Georgia, Fiji and Uruguay, who gave them some problems.

The Springboks did do a physical number on 14-man Italy, and indulged themselves in some offloading, running rugby against Namibia and Canada. Yet in losing to the All Blacks and even in ending Japan’s dream run last weekend the Springboks backs have not crested a whole amount.

They lack an inventive playmaker, and Willie le Roux has not looked on top of his game, not so far anyway, while they are also missing their go-to man for some X factor, Cheslin Kolbe. Granted, his replacement, S’busiso Nkosi and Makazole Mapimpi, do still give them real finishing power.

Each team prides themselves on their defence, and there’ll be no quarter given across the gainline, which is where the game will be fought, akin to two boxers going toe-to-toe in the middle of the ring.

Wales made 152 tackles against France, with six of their pack making 14 or more, and their warriors, Ken Owens, Alun Wyn Jones, Justin Tipuric and co, will have to dig deep again.

A tad ominously for Wales though, their defence was unusually porous last week, missing 26 tackles and conceding 16 line breaks. But there’s no more resilient or spirited team in the tournament, and they scrambled for their lives.

Presumably too, Shaun Edwards will have them well primed as the Gatland-Edwards era comes to an end, besides which the Springboks will be way more direct.

Ross Moriarty’s promotion in place of the injured Josh Navidi will not weaken their physicality, but the loss of Liam Williams for the rest of the tournament due to a collision in training is beyond cruel for the player and Wales alike.

His absence seriously detracts from Wales’ running and counterattacking game, although he is replaced by a fellow Lion in Leigh Halfpenny, who starts in his 89th Test.

Halfpenny is every bit as brave and effective under the high ball, and, true to form, there is liable to be one or two of them coming his way from Faf de Klerk and Handre Pollard.

In what is liable to be a war of attrition, Rassie Erasmus has again gambled on a 6-2 split, in part with a possible six-day turnaround in mind to a final. And with the power of locks RG Snyman and Franco Mostert, as well as Francois Louw and a heavyweight front-row to see out the game, the Boks look equipped to power on to a third final and deny Wales a first one.