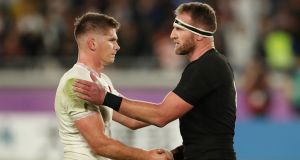 The whistle had barely sounded on the England’s 19-7 win over the All Blacks, more a 19-7 thrashing than a victory, than the debate will have begun to rage. How good a one-off performance was this in England’s rugby history?

In the course of the professional era, there have been some big ones, not least winning the 2003 World Cup with that final win in extra-time, the 46-6 dismantling of Ireland to seal the Grand Slam earlier and the win in Wellington when defiant for almost ten minutes with 13 men earlier that same year.

But as a one-off, this may just have eclipsed even those. It certainly ranks up there with them and anything since. This after all was a thoroughly deserved win in which they eclipsed the back-to-back champions in every department - set-pieces, mauls, most of all the breakdown, the respective kicking games and both attack and defence.

Yet, understandably, Eddie Jones was having none of it. The euphoria which will greet this win cannot be allowed to infiltrate the English squad, not with the week of the final against either South Africa or Wales now looming.

Hence, repeating his post-match mantra which started at pitch-side, Jones dismissed a question as to where this ranked in English list of huge performances.

Similarly, when it was suggested to him that the team was one step from immortality, Jones said: “We’re ready for a good week, that’s all we have to be ready for. We will recover really well and then on Monday, we’ll recover well and worry about Tuesday and Wednesday. All that stuff you’re talking about is for you guys, so enjoy it because you won’t be getting anything from us.”

Even the great team of 2003 struggled over the line in the final against an unexceptional Wallabies side, but Jones believes this team can cope with the heightened sense of expectation and the euphoric reaction which will come with this performance.

“Because we’ve got the right focus. You remember the meeting four years ago at Pennyhill Park, our first meeting together. We wanted to be the best team in the world and we’re not the best team in the world. We’ve got an opportunity to play in a game where we can prove we are. That’s all we’ve got to be concerned with and we’ll prepare well each day. As boring as that seems to you, the players are loving it.”

“We wanted to make them play from deep, which we did because we were able to get on the front foot around the ruck, which created opportunities to either run or kick. Our kick chase was fantastic, really good.

“We’ve had two-and-a-half years to prepare for it, they’ve had a week to prepare. We’ve been unconsciously preparing each game for this game. When you engrain habits in your players, they’re easier to sustain. We saw some great habits from our players tonight.

“They’re a great team, they won two World Cups, they’ve got a great coach and a great captain, so we had to battle hard today. You always go in with an idea of how you want the game to be and it never goes exactly like that. You’ve got to give credit to New Zealand for fighting until the end, we had to dig deep to win that game.”

Explaining why England were able to have the better of the All Blacks physically, Jones said: “Steve Borthwick and Neal Hatley do a fantastic job drilling the forwards and we were able to get a bit of physical ascendency in that area. The way you attack their defence line is how you manage the breakdown situation, so it’s due to the attitude of the players, which is a reflection of their coaches. Steve and Hats did a great job today with the forwards.

“The thing about playing New Zealand is that you might beat them on the scoreboard but you never actually beat them. You might see them at the end of the game and they’re still coming at us.”

For all of that, The English players still had to think on their feet by reacting to events on the pitch and acting accordingly, and Jones praised his captain Owen Farrell.

“Owen and the leaders on the field were exceptional today. They kept the team disciplined, stuck to the game plan, kept attacking where we thought New Zealand were weak and didn’t divert from there.”

Sitting alongside Jones, Farrell maintained his leg was fine even though he was clearly playing through the pain barrier from a collision in midfield with Jack Goodhue for almost all of the last hour, manfully putting in an 80 minute shift.

Explaining England’s decision to form what they called a semi-circle in facing up to the haka, the English captains said: “We knew we had to be within a radius behind them and we wanted not to just stand there and let them come at us. We wanted to keep a respectful distance and be respectful to that but we didn’t just want to stand in a flat line and let them come at us.”

England’s win means Farrell’s parents, Owen and Colleen, can now extend their time in Tokyo until next Saturday’s final. It mightn’t be an entirely disappointing World Cup for Ireland’s incoming head coach.

1 Gordon D’Arcy: Change has to happen before Ireland's trip to Paris
2 Out of Bounds: Patrick Reed helping make the ‘C’ word less taboo
3 Kevin Seaward: ‘The first time I wore the Vaporflys, I hated them’
4 Seán Moran: Dublin and Galway make good starts in differing circumstances
5 Gerry Thornley: Wild reactions to this Ireland team as fickle as the wind
Real news has value SUBSCRIBE