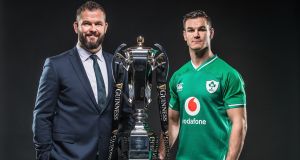 Cast your mind back to November 2018 - the night of Saturday 24th, to be precise. Ireland had just beaten world champions New Zealand on home soil for the first time in history. They had recently won the Grand Slam, followed by a first ever series win in Australia. The world was their oyster. Yes, this time it would be different. Ireland would reach the Rugby World Cup semi-finals, and maybe they’d go even further. Alas, things didn’t quite go to plan. The Joe Schmidt years ended with a squeak, rather than the booming crescendo they probably deserved. After a golden 2018 things all seemed to go a bit stale - a physically punishing 32-20 defeat to England in Dublin on the opening weekend of the 2019 Six Nations setting the tone for what was to come.

Schmidt stood down in the wake of Ireland’s quarter-final exit in Japan, with Andy Farrell stepping up into the top job for the forthcoming championship. Rory Best’s departure means Johnny Sexton captains the side - providing he can stay fit - while Farrell has called up a selection of young Leinster thoroughbreds to complement a familiar looking squad. Farrell has a big decision to make at scrumhalf, with Ulster’s John Cooney - the best Irish player this season - pushing Conor Murray hard for his number nine jersey. An emphasis on more expressive, expansive rugby - allowing the likes of Jordan Larmour and Jacob Stockdale to flourish - would be welcome, in what will be an intriguing championship.

After six years of Schmidt it’s time for something new. Farrell, one of the greatest rugby league players of all time and a Wigan Warriors legend, arrived in Dublin in 2016 to work as Ireland’s defence coach. He’s clearly made an impression since, with the IRFU opting to promote from within to replace the Kiwi, handing Farrell his first head coach role after working with Saracens, England and the Lions as an assistant before moving across the Irish Sea. Straight talking and no-nonsense - as you’d expect from someone who made his Wigan debut aged 16, before captaining the Warriors and Great Britain at 21 - the 44-year-old is contracted until the 2023 World Cup in France.

He takes over with Irish rugby at an interesting crossroads. Several senior pros are at, or perhaps just past, their peak - not ready to be sent out to pasture just yet, but perhaps unlikely to be around in four years time. There is also an incredibly exciting crop of young players who will surely come to the fore during this World Cup cycle. Farrell’s first Ireland squad reflects this balance quite nicely - he has retained plenty of experience, but selecting the likes of Ronan Kelleher, Caelan Doris and Max Deegan is a clear nod to the future, as well as the present. With Farrell an integral part of Schmidt’s coaching staff, perhaps change will be gradual as he tries to mould Ireland in his vision. It would, however, be nice to see him encourage a more attacking brand of rugby in his first Six Nations in the big chair.

Time waits for no one, although Sexton is doing a decent enough job of delaying the inevitable. The 34-year-old is heading into his 11th Six Nations, and Ireland remain as reliant on their new captain now as they have ever been. This is partly down to the lack of potential successors to Sexton’s throne, and partly down to the enduring brilliance of Leinster’s number 10. Given Sexton’s age his fitness is always a concern, and he has been out since the start of December with a knee injury sustained in a Champions Cup clash with Northampton.

However, he remains impressively durable and he started 10 Test matches last year, including all five Six Nations fixtures and four games at the Rugby World Cup. With Joey Carbery set to miss the whole championship with his latest injury and Jack Carty struggling for form, Ross Byrne is set to act as Sexton’s current understudy. Byrne has blossomed for Leinster this year but he is not quite ready to fill the boots of his provincial teammate. Farrell’s decision to make Sexton his captain - ignoring the likes of James Ryan and Iain Henderson - highlights his ongoing importance to Ireland, as he leads them into a brave new era.

One of the biggest frustrations of the World Cup was seeing Ireland’s most exciting attacking players consistently on the periphery, often starved of possession and with most of their involvement coming on the wrong side of the ball. Among those who weren’t given the platform to really shine was Jordan Larmour, with veteran Rob Kearney preferred at fullback in the crunch defeats to Japan and New Zealand.

However, there has since been a changing of the guard. The 22-year-old has started the season as Leinster’s first choice 15, a role he is likely to fulfil for Ireland on February 1st despite the best efforts of Ulster’s Will Addison. Larmour has enjoyed a fine campaign so far at provincial level and looks ready to transfer his form seamlessly into the international arena - providing a foot injury doesn’t limit his involvement. A livewire in the backfield, his running with the ball in hand - and ability to step off either foot - make him a potent attacking threat, while he continues to improve defensively and under the high ball. He’s got the X-Factor and could be set for his breakthrough year.

A crushing opening round defeat to England in Dublin was not the start the defending Grand Slam champions were looking for. Victories over Scotland, Italy and France followed before a comprehensive final weekend 25-7 loss in Wales saw Schmidt’s men finish in third place.

Ireland’s tournament looks set to be defined by the second and third weekend, with the visit of Wales followed by a trip to Twickenham. A last round trip to Paris will certainly test the nerve if there’s still silverware to play for. Third.