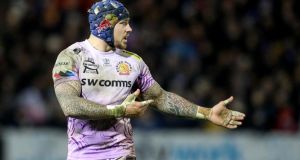 Jack Nowell has joined Billy Vunipola on the injured list for the Six Nations after England head coach Eddie Jones revealed he is to undergo surgery.

Nowell finished Exeter’s European match against La Rochelle on Saturday but faces an operation to repair a damaged ankle that could prevent him from playing any part in the Championship.

It is the second hammer blow on a morning of bad news for England who also learned that Vunipola sustained a broken arm while on Champions Cup duty for Saracens on Sunday.

“Jack is injured and is going to have an operation and we’ll see when he gets back,” said Jones of the Lions wing whose career has been plagued by injury.

It is the fourth time Vunipola has sustained a fracture to one of his arms, robbing England of one of their most potent carriers for the Six Nations.

“It’s massively disappointing for him but these things happen. There was a rugby league great, Mal Meninga, who broke his arm four times in two years,” Jones said.

“Post that two years he then played six or seven years, won grand finals and won Test matches for the Kangaroos.

“The tide will turn for Billy. At the moment it’s tough and he probably feels the whole world is against him, but he’ll be all right.”

Speaking for the first time since it was announced Saracens would be relegated from the Gallagher Premiership for breaching the salary cap, Jones had a simple message for his stars from Allianz Park.

Seven players from the Premiership and European champions are present in England’s 34-man squad for the Six Nations and they will head to a pre-tournament training camp in Portugal with their club futures shrouded in uncertainty.

“All of that business, that will get sorted out. It’s important but the only important thing for those boys now is to get ready to play for England.”

Jones has opted against calling up specialist number eight cover for Vunipola, overlooking Harlequins’ Alex Dombrandt and leaving Tom Curry, Lewis Ludlam and Ben Earl to compete for the position.

Umaga, nephew of former New Zealand captain Tana, is included ahead of Marcus Smith who trained with England in the build-up to the World Cup.

England launch their Six Nations title quest against France in Paris on February 2.

“This is a great opportunity for us. We came second in the World Cup. We missed out. We didn’t play well in the final,” Jones said.

“We have a good opportunity to talk about that, learn from it and then go on and be the greatest team that the game of rugby has ever seen.”