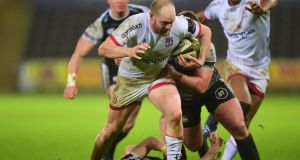 Ulster’s Matt Faddes in action during the Guinness Pro 14 game against Ospreys at the Liberty Stadium. Photograph: Alex James/Inpho

Ulster head coach Dan McFarland hit out at his team’s naivety after they became only the second side to lose to the Ospreys this season in Saturday night’s game at a rain-lashed Liberty Stadium in Swansea.

This was a dogfight of the highest order with the conditions causing havoc. The end result was hugely disappointing for McFarland given the game was there for the taking.

Tries from Robert Baloucoune, Matt Faddes and Stuart McCloskey had seen Ulster lead by a point with 10 minutes to go, but they were outdone at the last.

“I’m really disappointed, but I’d like to say well done to the Ospreys. It was a battling performance from them and I thought they deserved the victory even though with five minutes to go it was our game,” McFarland said. “They played well in the first half and put some tries on the board.

“The game was ours in the second half. We did a really good job of getting back into the lead after they scored just after half-time, but the first half was the most disappointing. We were naive in messing about in our own 22 which gave them opportunities to score tries.”

This defeat can’t mask the fact Ulster are still having a fine season. They remain second in Conference A of the Guinness Pro 14 and are in the quarter-finals of the Heineken Champions Cup.

Ospreys, who have had a horror season, hit back with tries from Owen Watkin and Scott Otten, with Price adding a conversion and penalty. Burns responded with another three points.

The home forwards impressed in awful conditions and Otten grabbed his second try early in the second half before Ulster got on the comeback trail.

McFarland unloaded his bench and saw Faddes dummy over before McCloskey collected a fine cross-kick from Bill Johnston – who impressed as a replacement – to score.

Ulster had all the momentum, but they threw victory away as Price slotted a late penalty and Johnston’s drop goal attempt with the clock in the red was charged down.

Ulster will now look to bounce back at home to Cheetahs on Saturday.

“We’ve lost to a side that until this game had only won once this season,” said McFarland. “If you look at the Cheetahs’ run-in, they have the easiest fixture list in the league and we’re also competing with Glasgow who are on really good form. We have to keep winning games.

“This was a game which was really important. It’s not the end of the world, but it makes our game with the Cheetahs all the more important.”

Peel is understood to have been on the shortlist to succeed Allen Clarke, but Toby Booth – currently with Harlequins – is now favourite for the role.

“Dwayne is under contract with us and we don’t comment on speculation,” said McFarland.

Pressed on Peel, McFarland then added the qualities he brings to his young backroom team, which also includes former Ireland back Jared Payne.

“I think Dwayne is excellent. His philosophy in attack really fits nicely with the play I want. It dovetails nicely and he has a good way about him,” said McFarland.