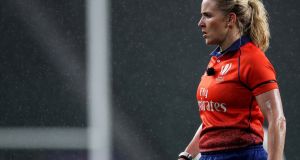 Ireland’s Joy Neville is the first woman to officiate (as TMO) in a Tier One Test match. File photograph: Inpho

Twickenham provided a strange affair. The first half gave us a kicking duel, with neither team showing any appetite to play an expansive game. The second half saw England seemingly content to let Ireland have the ball, slow it down, and rely on their massive defence.

In a pre-recorded interview with Jamie Heaslip and Caelen Doris we had learnt of Ireland’s detailed lineout preparations. Well, from what transpired there are some very serious questions to be answered by both players and coaches.

Doris, hopefully, will be a contender for the Lions - we won’t have many.

By half-time England should have been out of sight but their lack of ambition, or perhaps refusal to show their true hand before visiting Wales this weekend, meant that wasn’t the case.

Ireland came out in the second half showing more resolve, and the anticipated thrashing did not come to pass. So, while it’s not total despondency, it’s definitely not good.

Referee Pascal Gauzere, for his second match in recent times, did not come to terms with the breakdown. But it would be unfair to say that he influenced the outcome, he certainly did not.

English bodies persistently slowed down Irish possession, and the referee tried a blend of management, prevention and sanction. The course of action needed was to sharpen his whistle and penalise mercilessly to achieve the necessary change in player behaviour and to enable fast ball.

The Irish were no shrinking violets in this area either. Indeed, when Maro Itoje seemed off his feet when making a vital turnover, it was clear that Peter O’Mahony had side-entered the breakdown to pull him over.

Nevertheless, with England having to make over 230 tackles to their opponents under 70, its fair to say that Ireland suffered significantly more.

Nigel Owens, from the TMO booth, called a penalty against Quin Roux for what was barely a high arm challenge. It was three points, and the intervention was harsh and unnecessary. Ireland could legitimately have asked him to have a look at a few by England.

The scrum is a huge and traditional part of Georgia’s game and they will be less than amused that Pearce sanctioned them five times (four penalties and a free kick), while Wales were not pinged once; and this despite some clear angling and driving across by the Welsh props. On two occasions Wales illegally destroyed Georgian scrum possession, with the referee calling “ball out.” Yes, indeed it was out, but it was useless.

Ireland’s Joy Neville made history becoming the first woman to officiate (as TMO) in a Tier One Test match, making two accurate and important foul play calls. The second one was for a dangerous swinging arm by Beka Saginadze to the head of Welsh captain, Justin Tipuric, who could not continue.

Pearce slavishly applied the high tackle protocols, and mitigated the offence from a red card to yellow, why? – because Tipuric was falling. Let’s be clear here, if a ball carrier actually falls into the tackle, then mitigation is allowed. Fair enough.

However, in this instance, Saginadze knew full well what was happening, had clear sight of the player falling, and then hit high. Rugby common sense should have seen a red card, and the Welsh are understandably very annoyed at how this was handled by the referee. Sam Warburton is quoted as calling it “a dirty cheap shot.” It was.

Sunday brought us to Murrayfield. A glorious French try, off a stable scrum, proved the difference as France came out on top against Scotland. Referee Wayne Barnes showed why he has put distance between himself and the rest. He was rigorous at the breakdown, and less verbose than he can be which was also for the better. It would be petty to pick on a decision here or there.

Georgian official Nika Amashukeli was on the touch line to assist Barnes. He is a referee we will surely see more of at this level.

In very sharp contrast to Twickenham the Tri-Nations match between Australia and Argentina started with a real flourish, both teams intent on opening up at every opportunity. But gradually it descended into an unseemly dog-fight with tempers fraying frequently.

Referee Paul Williams and Australian captain Michael Hooper were on first name terms, but otherwise were clearly at odds with each other. Hooper was calling for breakdown penalties and Williams really needed to put a stop to it.

Just before half-time with Australia pummelling the try line, Argentina resorted to multiple offences to keep them out. Eventually, the referee called a halt to proceedings and we all expected a yellow card, but no, it was a warning only. Hooper was not pleased and demanded to know what action was being taken, with Williams unwisely entering into a dialogue with him.

The lesson here must undoubtedly be that the value of yellow cards is hugely diminished if referees insist on giving a warning before producing one.

The match ended on 15 points each, all penalties. But for a quirky bounce of the oval ball and Argentina would have stolen a try, and the match, at the finish. That would have given Hooper a lot more to say.

To finish off, the old habit of players huddling together before lineouts is sneaking back; these “committee meetings” need to be stopped and lineouts formed without delay.

That is, dare I say it, what’s written in the Book.