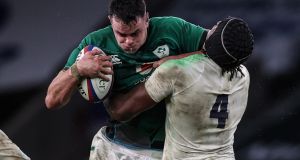 Ireland are currently stuck in no man’s land. The “fast tracking” of Irish born talent, initiated by David Nucifora six years ago, has yet to deliver enough players to move past a heavy reliance on the defunct player residency recruitment policy.

Hence the “United Nations” jibe by Eddie Jones. It rang true as muscular All Black and Springbok wanabees manfully failed to damage a ferocious English team led by Maro Itoje.

We believe Andy Farrell when he says the James Ryan generation “became men at Twickenham” but unmerciful thumpings in London and Paris are supposed to be confined to history. The courageous narrative is supposed to have been removed by Nucifora’s professional structures.

The IRFU promise that players are being sped through the ranks (as we see in Leinter and Munster), even publishing a full page of names in the programme before the Wales game. Nucifora can argue that these reinforcements are on the way but James Lowe is the last of the summer wine when it comes to signing fully formed foreigners. The question is whether this system, overwhelmingly propped up by private schools will be enough to make the Farrell era a success?

Since Japan 2019 it is interesting to note that Eddie Jones replaced Steve Borthwick as England forwards coach with the Springboks' Matt Proudfoot alongside other clever backroom appointments. Argentina’s Mario Ledesma added Michael Cheika before their historic victory over New Zealand.

Farrell is building a brand new squad - eight debuts in 2020 with more expected against Georgia - after adding Mike Catt and John Fogarty to Joe Schmidt’s previous backroom. So far, the technical aspects of the team are malfunctioning. Is that the fault of Ryan’s generation, the coaches or the system?

Perhaps, being generous, it is all the above.

“We are on a completely different journey to what England is on. We came to experience Twickenham for the first time, for some of our lads, and we found out a lot about our players. I think some of them became men.” Ireland coach Andy Farrell on the 18-7 defeat to England.

“Absolutely incredible experience out there reffing my first Super Rugby match!! Thanks for all the amazing messages and calls - I’m blown away by the support.” Aimee Barrett-Theron after refereeing Bulls v Pumas Super Rugby Unlocked final in South Africa.

“I might go for a walk now...... around my bed. Might check out the bathroom.” Nemani Nadolo, the Fijian winger in quarantine.

“I think it is important to remember we are not playing against any mugs. Ireland are a serious team and a well coached team and they have some really good players. They were never ever going to roll over. But, you know, we want to be more relentless. We want to be more clinical. We want to take larger control of the game. For us, that is our next step.” Offloader of the week Maro Itoje is disappointed with the final score.

Hollie Davidson, the Scottish referee in the England versus France curtain raiser at Twickenham, made a call in injury-time that gifted the match to the hosts.

Technically, Davidson can argue that the trapped French hooker Agathe Sochat was legitimately blocking the ball. Emily Scarratt clipped the penalty for a dramatic come-from-behind 25-23 victory that seemed unbelievably harsh on France, especially as we watched the next match and Pascal Gaüzère refusing to penalise exactly the same situation on multiple occasions. Gaüzère - who came in for some harsh comments pre match from England coach Eddie Jones (that went unpunished) - did not put the whistle anywhere near his lips when the opportunity was there to instruct the players to roll away.

Davidson is a fine referee with a bright future but, from The Offload’s perspective, she got the game defining decision wrong. Sochat made the tackle and was trapped. France must be disgusted. Twickenham wins are bloody rare.

Georgia on my mind

So, Georgia visit Lansdowne Road next Sunday. The excitement is palpable. You may have noticed the social media drum beat for Tbilisi to replace Rome as a Six Nations destination went silent after the shooting last September.

The main line of media enquiry will centre around Ulster pair, David Humphreys and Neil Doak, being part of the Georgia coaching team but it is hard to ignore the dark cloud hanging over this proud rugby nation.

For those who missed it, two months ago Georgia Rugby Union vice president Merab Beselia was arrested for allegedly pulling a gun and shooting former Sevens captain Ramaz Kharazishvili in the shin.

The Interior Ministry reported that Kharazishvili, a vocal critic of how the sport is being governed, was treated for “intentional less grave bodily injury” that did require surgery. That all this supposedly happened inside the union’s offices made it an issue that you would presume would be examined in more detail by - stop sniggering - World Rugby.

Dig a little deeper into Georgian sport - a mild Google search - and you will find plenty more murky goings on, including the murder of teenage football player Giorgi Shakarashvili.

Or we could ignore all that, settle into an easy life and fill the gaps with Humphreys’ return to the pitch where he guided Ulster to European glory back in 1999.

2 Ken Early: Özil a symptom of Arsenal’s stagnation rather than a cause