Wales banking on experience to stem the fresh French tide 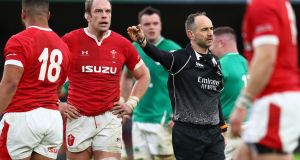 There was an echo of the Warren Gatland era this week when the prop Wyn Jones accused France of cheating in the scrum. It was a calculated attempt to provoke the Six Nations leaders, whose indignant response went over the top, but it also showed the pressure the champions are under.

Defeat would surrender their interest in the title and end the longest unbeaten home record in the competition. It is three years since Wales lost in Cardiff and 10 since France last won there, but there is a sense that after a decade in which Wales, Ireland and England dominated the Six Nations, the balance of power may be shifting.

Wales are relying on experience. Their starting line-up for Saturday’s match contains a Six Nations record of 859 caps, which does not include appearances for the Lions, compared to France’s 234, only 98 more than the home captain, Alun Wyn Jones, has won for his country. It is the rawness of Les Bleus that the cheating barb was designed to exploit before their first away match of the tournament.

France’s head coach, Fabien Galthié, said it showed a lack of respect for the French nation, not just his team. Never mind its diminishing importance in the game – France had only two put-ins against Italy in the last round of games – the scrum has long been a source of pride and they have not been immune in the past to taking short cuts.

When they played Wales in Cardiff in 1976 when both were chasing the Grand Slam, there was a plan to nobble the home tighthead Graham Price. He duly left the field early after being gouged by an opponent whose fingers were coated with liniment.

“Whoever put Price off made a mistake because the replacement [Mike Knill] was better,” said the France prop Gérard Cholley.

Such acts of foul play are no longer tolerated, but the scrum remains an area where the tolerance thresholds of referees are tested, especially as they are under pressure to let the ball come out rather than opt for a reset.

The set piece has been an area of weakness for France who were taken apart up front by England and Wales sense an advantage if the referee Matt Carley ensures the tightheads drive straight.

“I think the words [of Wyn Jones] were born out of respect for what French rugby has been about for many, many years,” said Alun Wyn Jones. “That is a dominant pack and flair behind. I didn’t want this to be a talking point which should be the game and the Six Nations. I hope the occasion is what we are talking about after the match.”

Of more concern to Wales than the opposition scrum is the scrumhalf Antoine Dupont, the heartbeat of the leaders who is quick to exploit opportunity. He is not a typical French scrumhalf, looking to speed up the game rather than slow it down and send box-kicks into the air, and Wales have recalled Gareth Davies in the position, another opportunist who has made interceptions his forte.

Davies honed his technique under the tutelage of Shaun Edwards who was Gatland’s defence coach for 12 years. Edwards joined France’s management team after the World Cup and if the five tries they have conceded give them the worst defensive record in the tournament after Italy, the win over England highlighted a change in attitude.

One reason why France have lost seven of their last eight matches against Wales in the Six Nations is a tendency to twist when it would be more prudent to stick.

They were 16-0 up at half-time in Paris a year ago before self-destructing and should have won in Cardiff in 2018. Last October’s World Cup quarter-final was another close encounter that went against them and if Galthié is to make an impact beyond a couple of home victories, he has to make his side more pragmatic and ruthless.

Both of which Wales were under Gatland and Edwards. Under Wayne Pivac, the players have been given a longer leash, but the defeat in Ireland in the last round was a reminder that meaningful change takes time.

Wales did well to remain in the contest until five minutes from the end having been outplayed for long periods, sustained by their obduracy of old, but they paid for a series of unforced errors and, never mind what was going on in the scrums, more crucially they lost the battle of the breakdown.

Pivac has turned to Ross Moriarty against France, but while he will add to their ball-carrying options, he is not a turnover specialist. They are missing Josh Navidi and Edwards will have worked on ways of slowing down Wales’s possession and forcing them to kick.

The future can wait for Wales. The weekend is all about winning before the trip to Twickenham in the next round and not just because it is a fixture that Wales have come to dominate.

It was interesting that it was one of his players who made the cheating allegation rather than the head coach; that would not have happened under Gatland. It needs to be a case of Wyn Wyn for Pivac. – Guardian