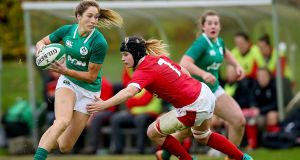 Eimear Considine: starts at fullback in the Ireland side to face England at Doncaster. Photograph: Tommy Dickson

Having dropped to the bench for the second round victory over Wales in Donnybrook, Aoife Doyle is recalled to the left-wing in place of Beibhinn Parsons. The Ballinasloe teenager has scored tries in both of Ireland wins to date, but will be absent for the remainder of the championship in order to concentrate on her forthcoming Leaving Certificate examinations.

Elsewhere, Michelle Claffey makes way at inside centre for Blackrock College club-mate Katie Fitzhenry. The latter’s most recent appearance at the 15s grade was also against England – a final round encounter at the Ricoh Arena in March 2018.

The Wexford native has featured regularly on the Sevens circuit since then and now returns to partner Sene Naoupu in the Irish midfield. Given their bonus-point triumph over the Welsh was viewed as a major step-up from their tentative opening round encounter with Scotland, it is unsurprising to see Griggs maintaining the nucleus of his side for the visit to South Yorkshire.

Eimear Considine and Laura Delany join Doyle in the back-three, while Claire Keohane and Kathryn Dane linked up at half-back for the second game in succession. Judy Bobbett will pick up her third cap in an Irish shirt with Kerry’s Ciara Griffin once more captaining the team at blindside flanker.

One of five English-based players in the match day squad, Harlequins prop Leah Lyons provides cover for tighthead Linda Djougang amongst the replacements. Hannah Tyrrell is also a welcome addition to the bench, having also spent the best part of the past two seasons in the sevens rugby programme.

Considering all of 44 points (51-7) separated the sides when they met in Dublin just over 12 months ago, defending champions England will be red-hot favourites to prevail on Sunday afternoon. Nevertheless, Griggs insists his charges won’t be there to simply make up the numbers.

“We have had a solid start to the tournament with two wins and are happy with the step up in our performance from week to week so far,” said Griggs.

“England are the defending champions and are coming into this game unbeaten too so It’s going to be a real challenge, However we intend to focus on what we can control within our own game and believe if we get our systems right that we should be able to really put them under pressure.

“We have no intention of giving them anything easy and are relishing the opportunity to test ourselves against one of the best in the world.”

If Ireland have designs on pulling off a shock, they will need to keep close tabs on England’s Loughborough Lightning triumvirate Sarah Hunter, Emily Scarratt and Katy Daly-McLean.

In addition to being surviving members of the 2014 World Cup-winning squad, they have accumulated an astonishing combined haul of 320 international caps.