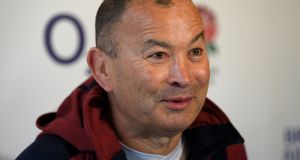 Eddie Jones has been forced into selecting Jonathan Joseph on the wing against Ireland after George Furbank was ruled out through injury. Joseph comes into the unfamiliar position of left wing as well as four personnel changes with Manu Tuilagi, Ben Youngs, Joe Marler and Courtney Lawes all returning to the starting XV.

Joseph has never started on the wing for England before but Jones’s hand has been forced with Furbank joining Anthony Watson and Jack Nowell on the injury list. Elliot Daly returns to fullback, having started on the wing against France and Scotland, with Jones deciding against handing Ollie Thorley a debut. Henry Slade, who has been sidelined with an ankle injury since before Christmas is on the bench.

Tuiagi’s return to the side is a welcome boost, given the disruption in the backline elsewhere. He has ended up on the winning side on all five occasions he has faced Ireland and was England’s standout performers in both the victory in Dublin last year and the Rugby World Cup warm-up win in August.

He suffered a minor groin injury in the defeat by France but provides some much-needed ballast in the absence of Mako Vunipola, who was ruled out earlier in the week for family reasons.

Marler takes his place, coming back into the side after sitting out the victory over Scotland altogether with Ellis Genge again among the replacements as one of six forwards. Lawes comes back into the side at blindside flanker with Lewis Ludlam dropping out of the squad while Youngs is restored at scrumhalf and will win his 98th England cap.

Elsewhere, Jamie George and Kyle Sinckler continue in the frontrow with Maro Itoje and George Kruis again the locks. Tom Curry make his third start at number eight with Sam Underhill at openside flanker. George Ford and the captain Owen Farrell remain at outhalf and inside-centre while Jonny May stays on the right wing. Luke Cowan-Dickie and Will Stuart join Genge in providing frontrow cover with Charlie Ewels coming on to the bench alongside Joe Launchbury and Ben Earl. Willi Heinz is also among the replacements, having started against Scotland.

“We’ve had a really good training week with Thursday probably our best session of the Six Nations, ” said Jones. “Ireland are a very good team, extremely well-coached. They are a team we respect a lot. They will bring their usual physicality and under Andy Farrell they’ve opened up their game a little bit. They are a tactically smart team.

“Conor Murray and Johnny Sexton, who have played 170 Tests between them, at nine and 10 will manage the game well. We’ve got to make sure we match their physicality and their emotion on the weekend.”