Captain Johnny Sexton continues to lead from the front

Johnny Sexton says that this current Ireland team is trying to build on the foundations laid by former coach Joe Schmidt. 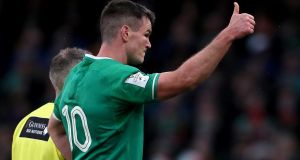 Johnny Sexton runs the Ireland team now and he wants the messaging to be clear. He feels, since the misery of 2019, too much blame is being passed around.

“In saying that, I think some of the messages that came out of our camp haven’t been taken the way they should be. We have taken a lot of what Joe’s done in the last few years and built on it, added bits to it. To suggest we have thrown away everything is just wrong . . . it is inaccurate.”

Concerns about Sexton’s wellbeing, after suffering a succession of heavy collisions, which left heavy bruising under his right eye, were initially allayed by Ireland coach Andy Farrell.

“Robbie Henshaw [did] HIA 1, he didn’t return to play,” said Farrell. “No [more injuries], a good bill of health, a few lads cramping but all is good.”

However, the Ireland outhalf did undergo a head injury assessment and, according to the IRFU: “He will complete his process over the [next] 72 hour period.”

Much should and will be made of Sexton’s all-consuming performance. He even tossed the coin beforehand. It was the only contest he lost.

“There was a lot said during the week about Johnny being captain,” said Wales captain Alun Wyn Jones. “I thought he was great today.”

If the mark of true greatness is being buried under a barrage of bile on Twitter, then Sexton has it made. Loose fingers were typing as soon as he abandoned the meet and greet with Michael D Higgins – Peter O’Mahony took over – to allow the medics strap his troublesome right leg (he’s not a fortnight clear of two months rehabbing knee damage).

“I stupidly got a rub before I got strapped so it was oily and slipped off,” shrugged captain Sexton. “The physios were not happy with me. Pete did a great job introducing the President to all the players.”

Case closed. Thereafter, all the captain’s tasks would prove essential.

“No!” went Tadhg Furlong as Romain Poite began the trickiest test by awarding Wales an early scrum penalty. “No! No!” roared an exasperated Furlong repeatedly.

“Tadhg was frustrated with the scrum we had five metres out,” said Sexton. “Our ball, we’d have no reason to turn it like that. I was just asking the questions. In fairness to Romain he was brilliant. We had good conversations.”

Sexton had spoken this week about keeping away from the ref’s notoriously cranky side. Paul O’Connell was sin-binned, on a dark Limerick night many moons ago, not for what he said but how he said it (and accidentally spitting in Poite’s face – on removal of his gum shield there was no front teeth to stem the phlegm).

After Jordan Larmour’s try – slipping away from Hadleigh Parkes and Tomos Williams like oily leg strapping – Sexton produced his now ceremonial error by scuffing the conversion into the swirling wind.

Sexton was instantly on the case but TMO Glenn Newman was quicker to state: “Romain, it’s all clear”.

So ended any politeness (a feature of Sexton’s interactions with Mathieu Raynal last weekend, which he regretted).

Sexton’s ire had social media aflame but, optics be damned, he was getting his point across.

“We checked both [passes]!” Poite replied but this was probably the case because the Ireland captain insisted.

Okay, he lost two battles, but the war would be won.

Publishable versions of the stream of mid-game social media abuse noted “Sexton has to calm down”. “You cannot keep arguing with the ref”. “Not a good look”.

The loudest voices were plain wrong. Sexton is cursed by previous acts of petulance. He knows this. He knows the captaincy didn’t come his way until old age because he craves the confrontation, the yapping interaction with ref and foe tends to go too far, but not on this day.

“I was just making sure you checked the other [pass],” he told Poite while lining up the conversion of Furlong’s surging try. “Here,” he smiled, passing the official some water.

It’s about influence. Human nature would tempt Poite to read the media this week when Sexton talked about learning from O’Connell’s mistake down in Thomond Park. That was a torrid experience for Poite as the Munster crowd gave him a huge amount of grief.

The veteran official supped some water and kept the game motoring along.

If Sexton has a habit of riling opposition supporters, neutrals and even some of his own, he certainly enrages opposition forwards with petulant finger pointing of their toes not being behind try line. Josh van der Flier squeezed over from the subsequent maul on 46 minutes but extra red jerseys sprinted out to block down his conversion.

Sexton, talking too much for many, walked the line by cutting his sideline between the posts.

At 19-7 with 50 minutes clocked the cautious coach would be forgiven for counting the seconds until Ross Byrne could close out victory.

Twickenham is a fortnight away, a Triple Crown for the taking, and Sexton has a dodgy leg.

No chance. He played the next 20 minutes with total abandon, flinging himself into collisions. He can’t help himself, even if such bravery could eventually exact a permanent toll.

To prevail, Ireland needed him to be this way. They needed their leader to have utter disregard for his own safety, because that’s how these Six Nations wars are always won. Here we witnessed shades of O’Driscoll against England in 2009.

The outside centre curse continued with Henshaw, on second examination, getting pulled ashore as Keith Earls glided into midfield. At least Bundee Aki remains unbreakable alongside Sexton, who by 57 minutes was increasingly slower to rise from the turf.

Wales were camped in the Ireland 22 now. When CJ Stander repeated last week’s heroic turnover against Scotland only to be penalised for not supporting his body weight, Sexton calmly spoke to Poite: “Can I say one thing? If they come in and seal can we poach over the top?”

“I will have a look,” Poite replied.

That’s what any good captain does – plant a seed in the referee’s mind.

On 64 minutes the inevitable happened. Coming second to the race behind Jacob Stockdale’s grubber Sexton hurt himself putting a big shot on Hadleigh Parkes. Earls dragged him up off the turf. He kept going. Kept drilling rucks. Kept firing a body not built to hurt hookers and flankers. Kept himself at the heart of this battle.

Finally, on 70 minutes with 12 points to spare, Farrell was ready to trust Byrne.

“He was in control, isn’t he?” said Farrell of the captain. “That’s what he has done all his life. That’s what he does best and with the added responsibility of captaincy I think he has added to his game.

“The [Friday night] meeting, that’s his meeting for him to do as he sees fit. The chat all week from the boys that he drags out of them is second to none. The last two performances have been nothing short of sensational.”