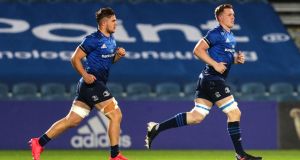 Leinster’s Dan Leavy and Scott Penny come out onto the pitch before the Pro14 clash with Edinburgh. Photo: Laszlo Geczo/Inpho

Four-fifths of Dan Leavy’s premium level was good enough to win the man-of-the-match award as Leinster cut a swathe through Edinburgh’s resistance, scoring eight tries in a 50-10 victory at the RDS on Monday night.

Fractions and percentages aren’t his thing apparently but that was the figure he offered with a little prompting, when asked to self-assess where he feels his game currently is, four matches into his comeback. It was a light aside but whatever method of calculation is appropriate there’s no doubting that he’s meeting performance markers.

Following on from three games as a replacement, consisting of 72 minutes, he started Monday’s night’s Guinness Pro14 clash. He received Nathan Chamberlain’s opening kickoff and found a route that propelled him partially through the three chasing Edinburgh players.

Whether carrying, tackling, foraging, turning over ball or marking his first start with a try in the second half, he applied himself diligently. It seems ludicrous to suggest given the final scoreline but Edinburgh were very physical up front and there was plenty of juice in the collisions.

The 26-year-old was happy to immerse himself in the rough and tumble, secure in the knowledge that he was physically prepared for whatever came his way. He explained: “I have done so many extras and so much work on my positioning, making sure I am in safe positions with Hugh Hogan our tackling and breakdown coach; he has been awesome for me.

“It is just another aspect of the game that bridges the gap from being an injured player and just running to getting to game minutes. I am not too worried once I am into the game. Yeah, it did feel good. The last couple of weeks I have been building towards a start.

“Accumulating those minutes every week has made that transition back towards (starting) a lot easier for me. I wasn’t thrown in the deep end. As a player you always want to play straight away; credit to the management and the coaches and my physio for taking the slow and steady route.”

A familiar refrain from players during the rehabilitation phase after injury is that they try to come back better players. Leavy said: “I was focused on getting back; that was the main goal. I am definitely in a better spot physically than I was before I got injured.

“My physio Karl (Denvir) has been awesome the whole way through. I am probably a little bit stronger. My body feels good, I am just trying to get that durability now that I struggled to get the season before I got injured. It was up and down, so just trying to make sure that I’m always on the pitch and I’m always ready to go, that’s one thing I’ve been working on.”

are therefore not the best arbiters when it comes to plotting a pathway. “I trust Leo (Cullen). As a player you always want to play and you want to get into it, but (it was) definitely the right decision to kind of break me back into it.

“Every game that I play I feel a little bit sharper and a little bit more like myself, and today (Monday night) I felt comfortable. I didn’t feel awkward; I didn’t feel like I hadn’t done something in training. There’s still a long way to go but I was pretty happy with the first start.

“I feel great. I don’t second guess myself when I’m out there, which is great. I’ve been playing now for a couple of weeks, but I was training with the squad for a long time. I picked up a few soft tissue things; they’re going to come with being out of the game that long, which were really frustrating actually.”

Leinster’s Pro14 campaign continues against the Cardiff Blues at the RDS next Sunday and then in December there are two rounds of the Heineken Champions Cup with matches against Montpellier and Northampton Saints; games within Leavy’s ambit.

He smiled when asked about a return to international rugby and if he’d be ready if the call came. “Now that is a good question. Yeah, I’d do my best. I feel like I’m finding my feet quite well. You know, it’s not something I’m thinking about, it’s not in my control, so as far as I see it we’ve got a game against Cardiff on Sunday night here, so I’m looking forward to that and if things change, things change.”

He hasn’t had any conversations with Ireland coach Andy Farrell and pointed out that given the depth of quality of Ireland’s backrow resources there are others currently further ahead in the queue. “There’s so much competition. If you were to get called into camp you’d have to show your form.

“Like, look at the players who aren’t playing (for Ireland) from Leinster, Rhys (Ruddock) has been incredible the last couple of weeks, Scott (Penny) has been incredible as well. It’s tough, there’s a lot of competition there, so if you were to get called in you would have to prove that you warrant that spot.”

Leavy’s focus is sensibly Leinster-centric and in compiling a body of work that will argue his case somewhere down the line for a return to Test match rugby.